People have gathered outside a courthouse in Hong Kong to support leading dissidents. The UK said the charges of subversion were "deeply disturbing." 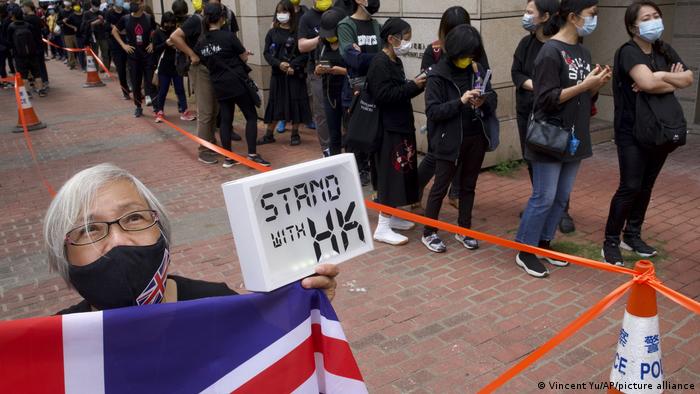 Hundreds of people gathered outside a Hong Kong court on Monday in support of some of the region's best-known dissidents who have been charged with subversion.

The international community spoke out in defense of the 47 activists, who are facing charges of conspiracy to commit subversion under the China-imposed National Security Law (NSL).

US Secretary of State Anthony Blinken called for the immediate release of the leading activists, as western powers accused China of stripping the freedoms and autonomy it promised the people of Hong Kong ahead of the territory's 1997 handover from the British.

The UK joined the global outcry as it said the charges were "deeply disturbing."

British Foreign Secretary Dominic Raab said: "The National Security Law violates the Joint Declaration, and its use in this way contradicts the promises made by the Chinese government, and can only further undermine confidence that it will keep its word on such sensitive issues."

The European Union, who had officials outside the court in Hong Kong trying to get inside for Monday's hearing, said the charges showed the law was being used to target political resistance, rather than threats to national security. 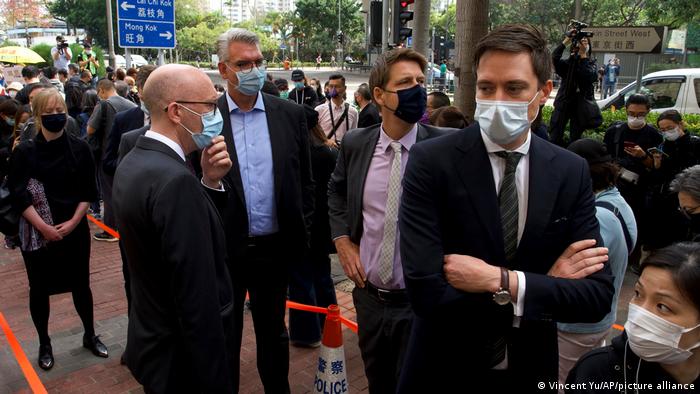 Charles Whiteley, Deputy Head of EU Office, joins Consuls from Germany, Sweden and the Netherlands outside the court

China is battling to quell dissent in semi-autonomous Hong Kong after members of the population hit the streets in 2019 as part of sustained pro-democracy protests.

What does the National Security Law entail?

The security law, which was introduced in 2020, makes it easier for the Chinese government to crack down on what it views as subversion, terrorism, or colluding with foreign forces, which are all punishable with a maximum sentence of life in prison.

The legislation prohibits a stream of political views while radically transforming Hong Kong's relationship with the authoritarian mainland.

Those charged can usually expect to be remanded into custody for months until their trial as the law removes the territory's tradition of granting bail for non-violent crimes.

Some of those supporters had banners and placards reading "Release all political prisoners" and "Liberate Hong Kong, revolution of our times." The latter is a slogan authorities say is now illegal under the NSL.

Tensions rose and fell throughout the afternoon as officers warned protesters they were breaking the law with their chanting and slogans.

Police could be seen stopping and searching several people outside the courthouse but the crowds refused to disperse, despite a ban on public gatherings of more than four people due to anti-coronavirus measures.

Former lawmakers Au Nok-hin and Leung Yiu-chung are on trial for organizing or participating in one of Hong Kong's biggest pro-democracy protests. Seven others pleaded not guilty in the same trial.

A group of leading public service broadcasters have expressed concern at the ban of BBC World News in China. BBC content is no longer being broadcast by Hong Kong's RTHK.

The pro-democracy advocate Lai is one of the most high-profile figures to be charged under a Beijing-imposed national security law.