The pro-democracy activist was sentenced to 13.5 months after pleading guilty to inciting "illegal assembly" during last year's protests. Wong vowed that it was "not the end of the fight," following the ruling. 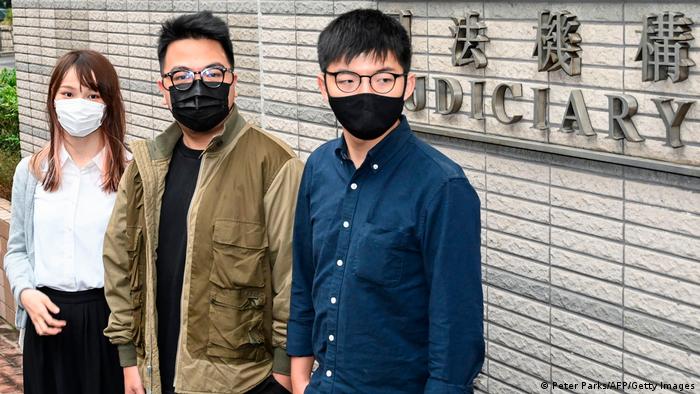 Wong, along with activists Agnes Chow and Ivan Lam, was taken into custody last Monday and has been in solitary confinement since, according to his social media posts. Chow and Lam were handed sentences of 10 months and seven months in jail, respectively.

"The days ahead will be tough but we will hang in there," Wong shouted as he was led away.

"The defendants called on protesters to besiege the headquarters and chanted slogans that undermined the police force," Magistrate Wong Sze-lai said as she delivered the verdict. "Immediate imprisonment is the only appropriate option."

'Not the end of the fight'

Former opposition lawmaker Claudia Mo told DW that the sentence was slightly shorter than many feared but added that there has been no attempt made to understand what is driving the pro-democracy movement.

"Do not underestimate Hong Kong people's determination to fight for their future," she told DW. "In the short-term, things may look bleak because of social restrictions due to the pandemic. But democracy, that is what we are fighting for, is humanity and humanity will always win."

Wong also vowed that it was "not the end of the fight, in a message on his Twitter page, shortly after the sentencing. "Ahead of us is another challenging battleground. We're not joining the battle in prison along with many brave protestors, less visible yet essential in the fight for democracy and freedom for HK."

The third charge of taking part in an unauthorized assembly was dropped due to lack of evidence, according to Wong's spokesman Isaac Chen.

"Though I've been in prison three times, solitary confinement is far beyond my expectation. It's indeed hard to endure, but as many #hkprotesters face lawsuits/imprisonment like me, I hope you continue letting them know they are not alone," he tweeted ahead of his sentencing.

'Worried for our lives'

For many in Hong Kong's pro-democracy movement, the harsh sentences didn't come as a surprise — but are a sign of a dangerous new normal for supporters of the movement.

"Protesters from all positions, all ages, all across the board are getting harsher and harsher sentencing, especially with laws like the national security law now passed," said one activist, who DW refers to as "Connor" as he did not wish to be named.

The new national security law, which was controversially passed in Beijing after it failed to clear Hong Kong's partly autonomous legislature, has left many Hong Kongers "living in an atmosphere of fear."

"It's just a fact of life to be worried for our lives," he added.

China sends 'signal' to the world

Avery Ng, a veteran activist in Hong Kong and the general secretary of the League of Social Democrats party, told DW he expects the jailed activists will face "a tough legal battle."

According to Ng, the Chinese government is using the sentencing "to send a strong cautionary signal not just to Hong Kong but to the world that no matter how much support you have in the public or in the international community, they are going to […] keep on suppressing the dissidents with an iron fist."

A history of organizing

Wong, Chow and Lam, 26, joined Hong Kong's pro-democracy movement when they were in their teens. All three organized large rallies in 2012 against plans to make Hong Kong's education system more "patriotic" and played large roles two years later in the "Umbrella Movement" — a 79-day peaceful occupation by a student-led movement for universal suffrage.

Amid the protests, activists like Wong, Chow and Lam have used their celebrity status to campaign for international sanctions against Beijing and support last year's protests.

Earlier this summer, China imposed a sweeping, and controversial, security law to outlaw "separatism, subversion, terrorism and foreign interference" — part of an effort to quell the protests. Chow is being investigated under the security law for allegedly "conspiring with foreign forces" by pushing for sanctions.

More than 10,000 people have been arrested over the last 18 months, and most of Hong Kong's leading activists and opposition figures face prosecution.

A previous version of this article stated that Joshua Wong was sentenced to nine months in jail. This has now been corrected. DW apologizes for the error.