Carrie Lam told a gathering of pro-Beijing lawmakers that pro-democracy protests and foreign interference were a danger to the former British colony's national security. Lam was hit by US sanctions in August. 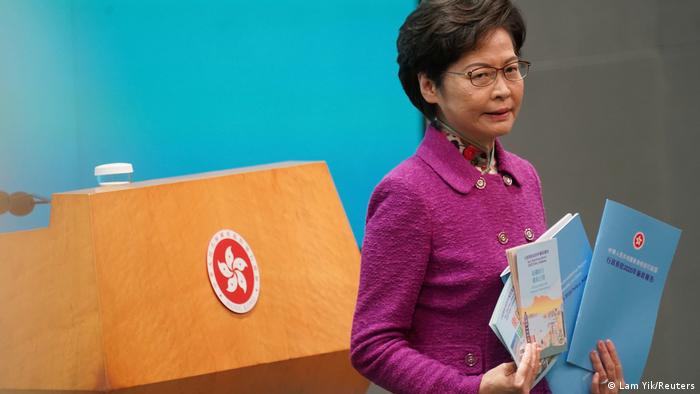 Hong Kong's leader vowed on Wednesday to restore order to the former British colony's political system after a year of massive pro-democracy protests.

Chief Executive Carrie Lam, the hand-picked leader, praised a new security law in a speech to a gathering of almost exclusively pro-Beijing lawmakers.

"After a year of social unrest with fear for personal safety, Hong Kong people can once again enjoy their basic rights and freedoms, according to the law," she said.

"One of our urgent priorities is to restore Hong Kong's constitutional order and political system from chaos."

Beijing imposed a tough security law on Hong Kong in June, aiming to crack down on dissent following months of anti-government protests in the city that at times descended into violence.

Chinese Foreign Ministry: 'It is a necessary measure'

Last year’s protests were triggered by a proposed extradition law that would have allowed suspects in Hong Kong to be sent to the mainland. The proposal was eventually scrapped.

Britain and China agreed under an international treaty governing the 1997 handover of Hong Kong that it should be ruled under a "One Country, Two Systems" model.

The idea was to allow the territory to retain a degree of autonomy and some freedoms that are denied to citizens on the authoritarian mainland.

The British government argues that Beijing is failing to live up to the promises it made when it signed that treaty.

Lam, who along with 10 other senior officials was sanctioned by the US in August, told lawmakers:   "foreign governmentsand legislatures have intensified their interference in Hong Kong’s affairs which are squarely China’s internal affairs, severely jeopardising our nation’s security."

Fifteen pro-democracy lawmakers quit earlier this month in protest at the ousting of four colleagues by the government, leaving the chamber as a muted gathering of Beijing loyalists.

More than 10,000 people have been arrested during last year's social unrest, among which 40 percent are students.

Joshua Wong: The fight for freedom in Hong Kong has not yet ended

Given China’s human rights record isn't Hong Kong taking a huge gamble? Regina Ip, a pro-Beijing party leader, says not to jump to conclusions. “The motherland has nothing but good intentions” for Hong Kong, she says.