Hong Kong′s democracy movement in dire straits as Beijing tightens grip | Asia | An in-depth look at news from across the continent | DW | 30.11.2020 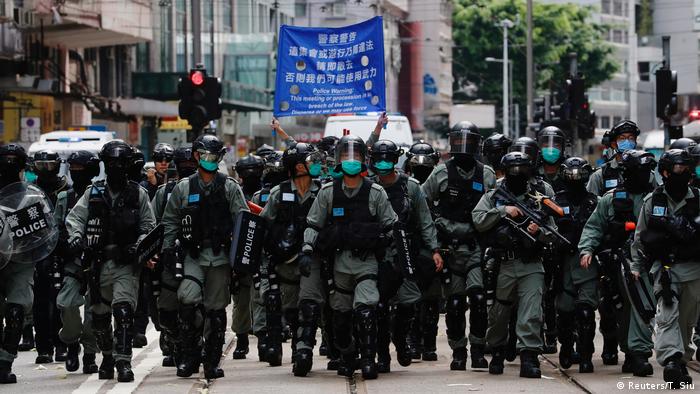 Five months after Beijing began implementing the controversial national security law in Hong Kong, the city that was once known for its high level of autonomy and freedom is now rapidly becoming less different from other cities in China.

On November 11, four pro-democracy legislators were disqualified after the highest legislative body in China passed a measure barring anyone from Hong Kong's legislative council who supports independence, refuses to recognize Beijing's sovereignty over Hong Kong, seeks help from "foreign countries or foreign forces to interfere in the affairs of the region," or commits "other acts that endanger national security."

The disqualification of the four pro-democracy legislators prompted the 15 remaining pro-democracy lawmakers to resign en masse, leaving Hong Kong's legislative council without any members from the opposition bloc for the first time in its history.

Kwok Ka-ki is one of the legislators disqualified by the Hong Kong government. He told DW that the move shows Beijing wants to control everything in the special administrative region. "They want to scrap the whole democratic movement and there will not be any democracy in Hong Kong," Kwok said.

In his view, once Beijing achieves total control over Hong Kong, the city that is supposed to be semi-autonomous will become the same as other cities on the Chinese mainland. "What the Chinese government has promised in the Joint Declaration and the Basic Law are lies," Kwok said. "Hong Kong doesn't have any democracy anymore. If there is any democracy, it's only decorative."

Jeffrey Ngo, a former member of the now-disbanded pro-democracy organization Demosisto, believes that the resignation of the pro-democracy legislators is inevitable. "Beijing is moving its goalposts all the time, and we have reached a point where even the most moderate members of the opposition camp are disqualified," Ngo told DW.

"Previously, some traditional pan-democrats would still have illusions that if they don't cross Beijing's line, they would be fine," Ngo explained. "However, Beijing's line just keeps shifting so it's inevitable yet tragic [that all members of the opposition camp had to resign]."

Ngo said the lawmakers' resignation means that one extra avenue for resisting against Beijing's encroachment of the city's autonomy has been closed. He added that things will continue to deteriorate in Hong Kong.

For pro-democracy veteran Lee Cheuk-yan, who served in Hong Kong's legislative council for more than two decades, Beijing's move to force out all pro-democracy legislators is a sign that it wants Hong Kong to go down the path of not having genuine elections while maintaining total control over the city.

"Right after Hong Kong returned to China in 1997, there was a sense of optimism that Hong Kong can achieve real universal suffrage in 10 years' time," Lee told DW. "In the beginning, Beijing seemed to be keen on respecting their promises. Things turned sour after 10 years and the promises they made were all broken."

In his view, the pro-democracy legislators were given no choice but to resign. He said while they could still stay on as legislators, it seems inevitable that they would all be disqualified by the Chinese government. "People in Hong Kong are worried that they won't be able to vote in the future," said Lee. "Or even if we still have the right to vote, we won't have genuine candidates that we can support."

Lee thinks the pro-democracy movement is now on a downward slope in Hong Kong. He said if there are no fair elections in the future, the city's democracy is "going down the drain."

A report published by the Chinese-language newspaper Ming Pao on November 24 pointed out that at least 54 district councilors in Hong Kong have been arrested or charged over the last year, many arrests or charges are related to the mass street protests.

One of them, Ng Kin-wai, has been arrested four times. While he has not been formally charged, he told Ming Pao that some of his colleagues have grown numb to news of his arrests.

Jeffrey Ngo told DW that since most protest organizers can no longer get legal approval from the police, the avenue for voicing discontent through street protests has been closed.

"On the international front, the national security law has made it difficult for people to do the kind of work that they used to do in a very high-profile way," Ngo said. "I think the pro-democracy movement in Hong Kong has reached a very low point."

Ngo stressed his biggest fear now is that some people in Hong Kong might think it's time to return to normal as legal protests and elections are no longer the viable route for them to voice their opinions. "They might think since there are no protests and elections, Hong Kong has become a depoliticized society," Ngao said. "They might have a feeling that let's just pretend this is all over."

However, Lee Cheuk-yan thinks that instead of walking away from politics, Hong Kong people should "fight fear with resistance."

"I think things will get even worse in Hong Kong but we should not be fearful and withdraw ourselves from the fight that we have engaged in for so many years," Lee told DW. "We may have to pay a higher price as a person or an organization. Maybe going to jail is part of the resistance that we have to come up with in the future."

To Kwok Ka-Ki, his fight to safeguard the values that define Hong Kong doesn't end with his disqualification. Rather than putting up his hands, Kwok encourages Hong Kong people to write articles, share thoughts on social media and to march on the streets if they have a chance to do so.

"I always like to compare what happened in eastern Europe in the 1980s and 1990s to what's happening in Hong Kong now," Kwok said. "It is because of 'people power' that they were able to establish democracy after years of authoritarian rule. We need to have this kind of hope and aspirations in Hong Kong."

Ngo said while he expects the situation in Hong Kong to keep deteriorating in the near future, he believes the US will play an important role in forming an international coalition that might stand up for Hong Kong. "A lot of what the international community can do will depend on how far Joe Biden is willing to go [on the issue of Hong Kong]," Ngo underlined.

"If the US proves that it's able to stand up for Hong Kong, then other countries could be expected to join the US in the effort because a multilateral coalition of countries is going to be the most effective way to check China's aggression and expansionism."