The trial of 10 Hong Kong pro-democracy activists alleged to have fled the territory for Taiwan amid anti-China protests has opened amid international pressure. The group had tried to flee Hong Kong by speedboat. 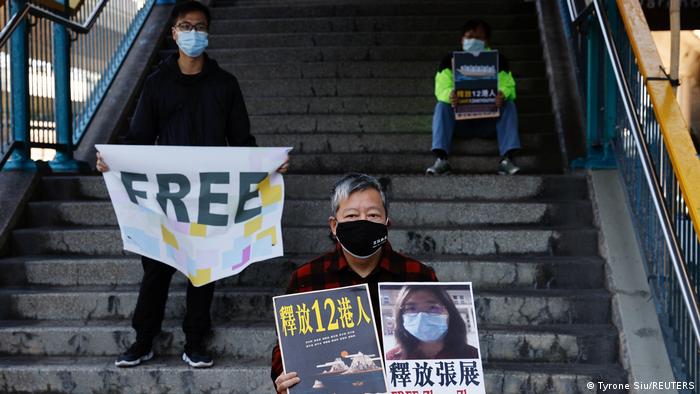 Ten activists faced trial in the southern Chinese city of Shenzhen on Monday after they were stopped trying to flee Hong Kong for Taiwan speedboat.

The trial was held at the Yantian District People's Court in Shenzhen, just across the border from Hong Kong.

Two minors who were also aboard the speedboat — intercepted by the Chinese coast guard in August as it headed for Taiwan — were expected to face trial separately.

The passengers feared they would be prosecuted for their activism in support of democratic opposition in Hong Kong under new national security laws.

The Chinese Foreign Ministry has dismissed calls from the US Embassy for the 12 to be released as interference in China's "judicial sovereignty."

The US Embassy said it had requested permission to observe the hearing, but that the request was denied.

"Their so-called 'crime' was to flee tyranny," the embassy statement said. "Communist China will stop at nothing to prevent its people from seeking freedom elsewhere."

British Foreign Secretary Dominic Raab said he was deeply concerned that the group had been tried in secret with just three day's notice, and that British diplomats had been denied entry to the courtroom.

"The Shenzhen 12 have not had access to lawyers of their choosing, raising further serious questions about access to legal counsel in Mainland China. We expect China to uphold the rule of law and conduct trials in a fair and transparent manner," he said.

The defendants face up to a year in prison for crossing the border and up to seven years for organizing the escape.

The activists were stopped when their boat entered Chinese waters on the way to Taiwan. Hong Kong residents must go through immigration when entering China.

Taiwan has become a popular destination for Hong Kong government critics seeking refuge. Others have sought refuge in the UK, for which they have faced asset seizures and arrest warrants.

Amnesty International's Hong Kong program manager, Lam Cho Ming, said in a statement the defendants have been denied basic rights such as the ability to hire their own lawyers.

"China must guarantee that all 10 people whose case is set to be heard today, as well as the two others detained with them, get fair and public hearings," Lam said. "They must also ensure that none of the 12 are subjected to torture or other ill treatment."

Relatives of the group have released a joint letter condemning the secret court hearing.

"We urge governments to send embassy personnel to the hearing to guarantee a proper and fair trial by the courts in Shenzhen," they said. The defendants include British, Portuguese and Vietnamese nationals, and the youngest is 16.

Pro-democracy activist Jimmy Lai has been granted bail and put under house arrest. The media mogul had been kept behind bars since December 3 over suspicions of fraud and colluding with foreign forces.

The pro-democracy activist was sentenced to 13.5 months after pleading guilty to inciting "illegal assembly" during last year's protests. Wong vowed that it was "not the end of the fight," following the ruling.

Many pro-democracy protesters have covered their faces to hide their identities and protect themselves from tear gas. The ruling comes at a time when it is compulsory to wear masks in the city due to the coronavirus.

Hong Kong police have arrested eight activists, including three ex-lawmakers, over their role in a July pro-democracy protest. This comes as China condemns US sanctions over Beijing's actions in the territory.