A Lebanese philanthropist based in Switzerland has donated a top hat owned by Nazi dictator Adolf Hitler to an Israeli foundation. He said that he did not want neo-Nazis to get their hands on it. 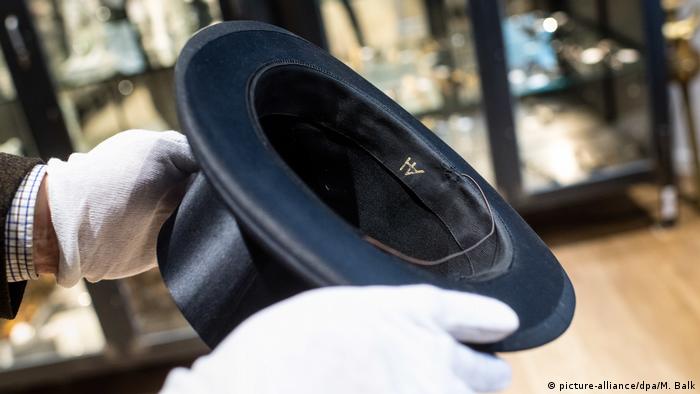 A top hat worn by Adolf Hitler was purchased for €50,000 ($55,300) by a Lebanese-born Swiss businessman Abdallah Chatila at a controversial auction held on November 20 in the Bavarian city of Munich.

Chatila said he wanted to keep the items out of the hands of neo-Nazis.

"It is extremely important to me that items from this painful historical era do not land in the wrong hands," Chatila said in an email sent to DW. The 45-year old, who runs a multimillion-dollar diamond business in Geneva, said he would have purchased more items, but failed to win all of the bids at the auction held by auction house Hermann Historica.

Other Nazi-era memorabilia purchased at the auction by Chatila included Hermann Goering's copy of Mein Kampf, which sold for €130,000.

All of the items were donated to the Keren Hayesod association, an Israeli fundraising group, which will decide on what to do with them.

"I strongly hope that such delicate items will be exhibited in a Holocaust museum that will have a better use than any other entity," said Chatila.

According to a profile on the website Swiss Arab Entrepreneurs.ch, Chatila's family came to Switzerland in 1988. He joined the family jewelry business in 1995 and eventually made a fortune in the diamond trade

"In these days, where tendencies of nationalism and anti-Semitism are growing in Europe, I would like to set an example with the means I have," he told DW.

Gesture of 'generosity and solidarity'

The head of the European Jewish Association, Rabbi Menachem Margolin, said in a statement Sunday that he was "bowled over" by Chatila's gesture. "In a cynical world, a real act of kindness, of generosity and solidarity," he said in a statement.

After Wednesday's auction, Margolin said that selling Nazi-era memorabilia was immoral. "It's wrong to monetize these blood-stained objects, especially in Germany," he said.

The collapsible top hat was manufactured by J-A. Seidl in the early 1930s and was found in Hitler's private residence in Munich.

The Mein Kampf special edition is one of 100 limited editions set aside by the publisher in Munich for special purposes and includes a history of the Nazi Party.

For the first time during her chancellorship, Angela Merkel is planning to visit the former Nazi concentration camps at Auschwitz and take part in a ceremony, according to a German newspaper report. (21.11.2019)