The relics included busts of Adolf Hitler and a Nazi Ouija board, used to try to contact the dead. Argentina is home to Latin America's largest Jewish population — but was also home to many Nazis after World War II. 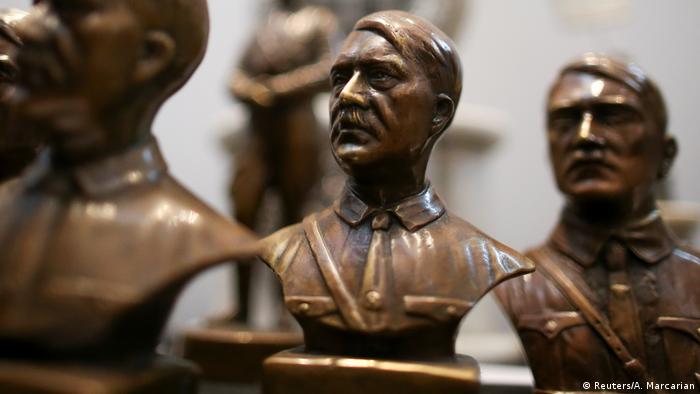 Argentina's Museum of the Holocaust has displayed a trove of Nazi relics that it plans to add to its collection.

The relics were originally confiscated by Argentine authorities in 2017 during a raid on a private collector of illegal art and archaeological artifacts.

After proving the authenticity of the objects, with the help of experts from Germany, authorities decided to give the museum custody over them.

The institution opened in 2001 and is the only Holocaust museum in Latin America. Currently under renovation, it is set to reopen in December when the Nazi collection will be displayed.

Read more: Nazi archives: Where Germany's dark past is stored on paper

The collection includes busts of Adolf Hitler, a statue of a Germanic eagle standing on a base bearing a swastika, an hourglass that belonged to a member of Hitler's feared SS and games to indoctrinate children into Nazism.

The items encouraged "hate, death and destruction," said Marcelo Mindlin, the museum's president. "The great surprise of these objects was that they could not have belonged to anyone but someone in the Nazi hierarchy."

The large collection also includes cranial measurement instruments, an original photo of an aircraft taken by Hitler's official photographer, Heinrich Hoffmann, a set of magnifying glasses and a Ouija board.

Mindlin said the relics, some of which can be seen in the Spanish-language clip from the Security Ministry below, have been added to the museum "in the service of transmitting democratic values, education and the fight for memory so tragedies like the Holocaust are not repeated."

‘Thousands of Nazis' fled to Argentina

Argentina is home to Latin America's largest Jewish population, but it's also the place where many high-ranking Nazis ended up at the end of World War II.

This included officials such as Adolf Eichmann, who was one of the main proponents and executors of the campaign to exterminate Europe's Jews.

He lived in Argentina under a pseudonym until he was captured by Israeli agents near Buenos Aires in 1960.

"There were thousands and thousands of Nazis here," said Eva Fon de Rosenthal, a 94-year-old Hungarian Holocaust survivor who attended the event.

"This reflects the power of the Nazis and the strong feeling towards Nazism that they had in order to invest and spend on these objects," she said of the relics.

Argentine Security Minister Patricia Bullrich, also in attendance, indicated that the museum might one day dedicate its space to confront Argentina's troubled relationship with Nazism.

If you look down on the sidewalk in Germany, you might spot small brass plaques remembering Jewish victims of Nazism. The project's creator was in Argentina to see the project unrolled for the first time outside Europe. (31.10.2017)