The German foreign minister is in Ukraine to help along a potential peace deal in the country’s turbulent east. The current ceasefire there has held for nearly a month. 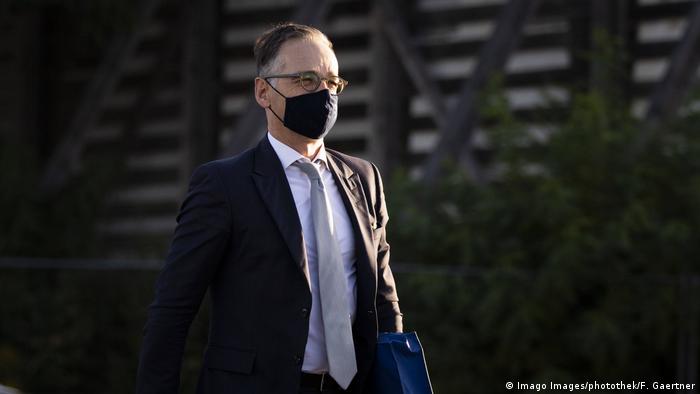 German Foreign Minister Heiko Maas on Monday lauded "significant progress" towards establishing peace in conflict-ridden eastern Ukraine, after meeting with his counterpart in the country's capital.

"Significant progress has been made recently," Maas said in a joint press conference with Ukrainian counterpart Dmytro Kuleba in Kyiv. He praised the current ceasefire, which has "lasted longer" than previous ones, and "good progress" on prisoner exchanges and de-mining activity.

Foreign ministers of France, Germany, Russia, and Ukraine could meet next month to discuss further steps towards ending the conflict, Maas said. Such measures could include restoring Ukraine's control over its borders or holding local elections, he added.

Maas is also expected to meet with President Volodymry Zelenskiy.

Germany has played a key role in mediating peace in the east of the former Soviet country, after conflict erupted there in 2014.

The foreign minister’s visit was intended to help move along a fragile peace process that has emerged in eastern Ukraine since the most recent ceasefire was declared there at the end of July.

"We want to move forward faster in the Minsk process — that's why I'm travelling to Kyiv today, " Maas had said in a Foreign Ministry statement released before his departure.

There have been over 20 attempts at halting fighting in Ukraine since early 2014, when conflict broke out in the country's east over a political swing away from Russia — and towards the EU — that ousted the country's pro-Kremlin president.

The Organization for Security and Cooperation in Europe (OSCE) said that over 100 violations had taken place within days of the latest ceasefire attempt in July.

Germany, along with France, has previously mediated talks between Ukraine and Russia, which represents the Ukrainian rebels despite denying direct involvement in the conflict. Most recently, the EU countries brokered talks in December 2019, ahead of the fifth anniversary of the 2015 Minsk peace agreement.

Zelenskiy, in power since last year, rejects the agreement's demand that the eastern Donetsk and Luhansk regions, near the Russian border, be granted more independence.

The conflict between Ukrainian troops  and Russian-backed rebels has killed over 13,000 people since 2014.

This article has been updated to reflect new developments.

A video that surfaced in Kyiv showing newborns who can't be reunited with their adoptive parents is causing outrage. DW investigates the contentious, but lucrative practice of surrogacy during the coronavirus pandemic.