Coronavirus: Babies born to surrogates stranded in Ukraine clinic | Europe| News and current affairs from around the continent | DW | 25.05.2020

A video that surfaced in Kyiv showing newborns who can't be reunited with their adoptive parents is causing outrage. DW investigates the contentious, but lucrative practice of surrogacy during the coronavirus pandemic. Julia and Peter, a married couple from Germany, are delighted about their new baby girl, born in early May to a surrogate mother from Ukraine.

"We are very happy to have our own child at last. We are totally in love," Julia tells DW, adding that they had dreamed for years about having a baby but that all attempts to conceive had failed.

The couple is currently living in a building complex in the dreary outskirts of the Ukrainian capital, Kyiv. The complex, which the private clinic BioTexCom calls a "hotel," is situated behind a concrete wall with barbed wire and serves as a kind of guesthouse for clients of the clinic. And it has recently made headlines around the world, after a video was issued by the clinic showing 46 babies who are waiting to depart Ukraine, mostly with couples from the West.

The video was made as an appeal for help in view of the fact that borders have been closed because of the coronavirus pandemic, making it almost impossible for the babies to leave.

Videos for the intended parents

In the courtyard of the "hotel," there are flags from the home countries of the clinic's clients: China, Spain, Sweden, Italy, Germany. To enter, people have to wear a mask and gloves. The rooms look expensive and tacky: old-fashioned furniture, ceilings decorated with stucco.

Read more: Should Germany's ban on egg donation be lifted?

Julia and Peter, both in their mid-30s, actually have different names, but want to remain anonymous because surrogacy is banned in Germany. They were able to enter Ukraine shortly before it closed its borders due to the pandemic.

"We bought tickets straight away and flew here. And then we waited two months for our daughter in this hotel," Julia says. Most other couples can see their offspring only on photos and videos that are sent by staff at the clinic.

"That breaks my heart. The first weeks are so important for forming a bond between a mother and a child," Julia says. 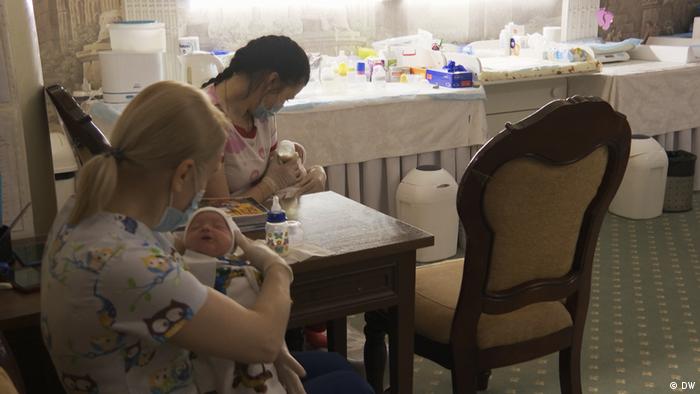 Unlike in many Western countries, in Ukraine surrogacy is legal and a lucrative business. Dozens of agencies offer services in this area. It is not clear how many babies born to surrogate mothers have not been able to travel back home with their intended parents. The relevant ministries have not responded to queries by DW on this score.

But the human rights commissioner in Parliament, Lyudmyla Denisova, spoke of more than 100 babies, telling DW that this number was unofficial — and rising.

The government seems not to monitor the situation of those newborns who are not born in big clinics like BioTexCom. "It is enough for the intended parents to know where they are," Denisova says. However, there are indications that some babies are living in rented apartments and being looked after by babysitters instead of medically trained staff.

"It all depends on the agencies. Because of the coronavirus situation, it has been difficult to find qualified personnel," says Sergii Antonov, the director of the Medical and Reproductive Law Center, a private Kyiv company. He says there are differences in the way babies are looked after, adding that at least some agencies possibly worked illegally.

"No one monitors them; they don't pay any tax," Antonov says. He advises people to be cautious in their choice of agency.

Banned in Germany, allowed in Ukraine

To be able to enter Ukraine despite the quarantine, on a charter flight, for example, couples from other countries need a special permit from the Foreign Ministry in Kyiv. There are two ways to get one. Most people try through their country's embassy — and that takes weeks, partly because of the coronavirus crisis. A faster method, Denisova says, is to apply to her office. But few couples seem to be aware of this possibility. 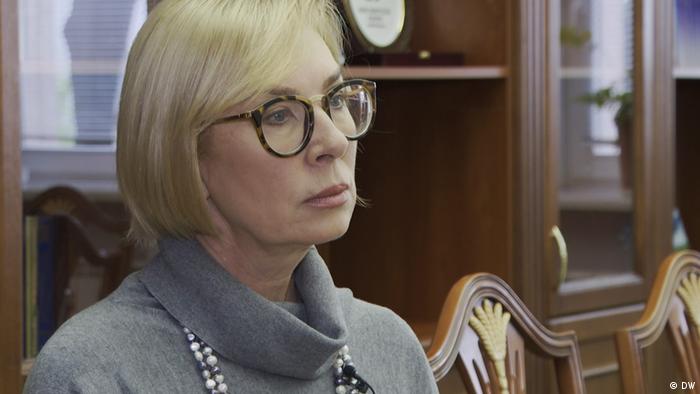 To get back home, couples need the help of their embassy, because it is only there that they can obtain the documents needed for the child to depart. "The [German] Foreign Ministry is aware of the problem," a spokesman said in response to a DW query. The embassy in Kyiv was ready "to help affected families and make it possible for the newborn children to leave and travel to their families in Germany."

The difficulty is that there are differences in the legal situation. In Ukraine, parents whose children are born by surrogate mothers are entered in the birth certificate. But this procedure is not recognized in Germany, where surrogacy is banned on ethical grounds. "According to German law, maternity is determined only by the birth of a child," explains Marko Oldenburger, a family law attorney from the Hamburg law office Rose & Partner.

This means that the Ukrainian surrogate mother, and not the intended German mother, is given maternity status with the rights that go along with it, Oldenburger says.

But with paternity, it is a different matter: "If the intended father's sperm is used for the artificial fertilization, his paternity can be recognized and confirmed with the approval of the surrogate mother, even before the birth." In this case, the child would be given German citizenship and would be allowed to leave Ukraine. The intended mother would then have to adopt the child at home in Germany.

The release of the video showing the babies in Kyiv has triggered a political debate in Ukraine. The presidential commissioner for children's rights, Mykola Kuleba, has come out in favor of banning surrogate motherhood. Denisova, the parliamentary human rights commissioner, also spoke out in a similar vein, but later modified her statement, urging better regulation instead.

"The demand for surrogate motherhood from abroad is very high. A ban would not solve the problem, but just create an underground system for begetting children," Denisova says.

In response to a query from DW, the Ukrainian Justice Ministry said almost 1,500 babies commissioned by couples from abroad were born to surrogate mothers in Ukraine in 2019. Around 140 of these children had at least one parent with German citizenship. According to the ministry, fewer such births were registered in 2018: about 1,100. But there have been no reliable statistics for years.

Many Ukrainian women are apparently ready to bear babies to earn money, driven by financial necessity. They are paid more than €15,000 ($16,350) per child. The average wage in the former Soviet republic is currently about €350 ($382) per month, and many people are being made unemployed by the coronavirus crisis.

"I definitely took this step for my own children," one surrogate mother told DW, adding that she wanted to finance "a good life" for them in this way.

Ukraine's in vitro fertilization clinics draw foreign couples desperate to have a baby. But the process can lead to paternal mistakes and citizenship questions, and experts want more regulation. (07.09.2018)

Thousands of Israelis have taken to the streets to protest a law that denies men access to surrogate mothers. Demonstrators were especially angry with Prime Minister Benjamin Netanyahu, who had once promised his support. (22.07.2018)

Petithory Lanzmann wanted to transport her dead son's frozen sperm to Israel to arrange surrogacy or assisted reproduction. But the right to have children is non-transferable, says European Court of Human Rights. (05.12.2019)

Made - The Baby Business