A rapid study by European scientists has revealed the impact of man-made global warming on recent extreme weather. They calculated the odds of record temperatures occurring with and without rising CO2 emissions. 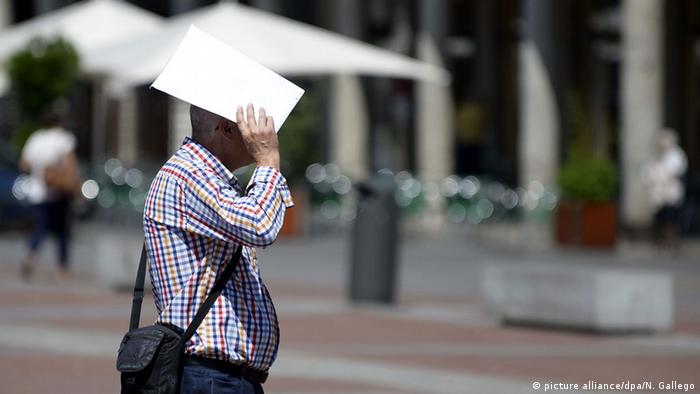 Last month's record-shattering heat wave across much of Europe was likely up to 3 degrees hotter due to global warming, an international team of scientists said on Friday.

"The July 2019 heat wave was so extreme over continental Western Europe that the observed magnitudes would have been extremely unlikely without climate change," their study concluded.

Temperatures would have been 1.5 to 3 degrees Celsius (2.7 to 5.4 degrees Fahrenheit) lower in a world without the effects of rising carbon dioxide (CO2) emissions, the scientists said.

Their rapid study was conducted shortly after Germany, Belgium, the Netherlands and Britain all recorded record-high temperatures during a heat wave that swept up from the Sahara desert.

Scientists from the World Weather Attribution team used eight different sets of complex computer models to calculate the odds of this level of heat occurring now versus a world without rising CO2 emissions.

They found that the record temperatures can be expected every 50-150 years in the current climate. But without "human influence on climate," the phenomenon would happen less than once in 1,000 years.

The report's lead author, Robert Vautard of the Institut Pierre-Simon Laplace in France, said Europe needs to get used to such high temperatures, as heat waves are likely to become more frequent and intense.

Vautard said that by 2020, temperatures during periods of extreme weather could rise by another 3 degrees.

That would make France's recent record high temperature of 45.9C, recorded in Gallargues-le-Montueux on June 28, more like 48.9C.

New data from the UN's meteorological agency, based on the first 29 days of the month, showed July 2019 may end up being slightly warmer than July 2016 — the warmest month on record.

A similar wave of soaring temperatures in June made that month the hottest June since records began.

The heat wave has now moved north to Greenland, leading to a 10-15-degree spike in temperatures that is accelerating the melting of the island's ice sheet.

Extreme heat was felt across Europe, from the United Kingdom to Luxembourg, and in cities like Paris, which suffered its hottest day ever. Germany recorded 42 degrees Celsius, its highest temperature since records began. (25.07.2019)