Climate change and the resulting heat waves that are sweeping Europe are increasing the risk of making the continent's most important waterway impassable for longer periods — a threat that's worrying businesses. 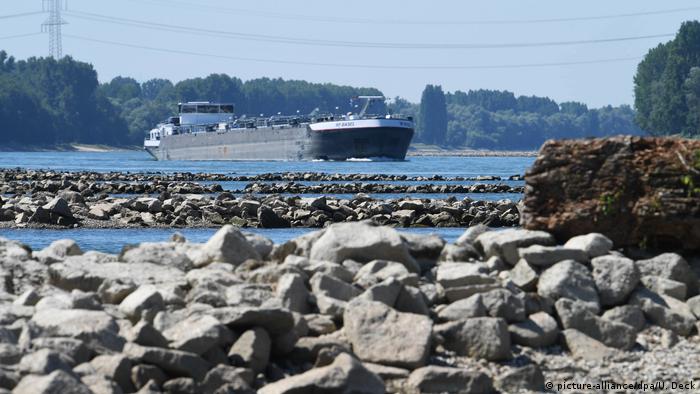 For DW business writers in Bonn, a look out of the office window is sometimes enough to realize the current state of affairs of the German economy. Close by, the Rhine River gently flows and the bustling boat traffic has come to be a good sign of economic activity in the country. When commercial traffic is heavy and the boats are full, the economy is humming along nicely.

Last year, however, the river's business indicator sent out a warning signal as the hot summer of 2018 caused water levels to drop to an extent that boat traffic ground to a halt for the first time in living memory. The historic shutdown is said to have shaved 0.2% off Germany's gross domestic product (GDP) last year, and unusually low water hampered cargo traffic from August to December.

This year, those conditions could be repeated. Extreme heat in mid-July caused water levels at Kaub — a critical choke point near Frankfurt — to fall to about 150 centimeters (59 inches), half the depth from just a month ago. Movements of the heaviest barges are already restricted, and all river cargo could again cease if the level falls below 50 centimeters. 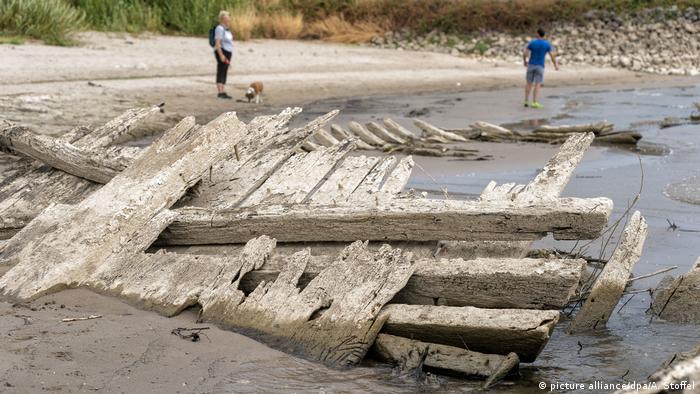 The Rhine's record low water level of 2018 not only brought ancient shipwrecks into the daylight, but also showed companies' dependence on the important waterway, too

The Rhine is critical to commerce in all of Europe. The continent's most important waterway snakes 1,233 kilometers (800 miles) through industrial zones in Switzerland, Germany and the Netherlands before emptying into the North Sea at the busy Rotterdam port.

It's a key conduit for raw materials and goods from coal and iron ore to chemicals and fertilizers. Duisburg-Ruhrort, the world's biggest inland port, is the gateway to the world for Germany's Ruhr Valley industrial heartland. Here, the steel mills of industry giant ThyssenKrupp still dominate the skyscape.

During a normal day, the steelmaker ships about 60,000 tons of coal and iron ore from Rotterdam to Duisburg. But due to a record streak of 132 days of low water in the Rhine last summer, ThyssenKrupp produced 200,000 tons of steel less than in other years.

Consumers also felt the blow of the 2018 emergency because gasoline prices soared in the wake of supply shortages that forced the government to tap into emergency fuel stockpiles.

Shallow water not only means reduced traffic. The chemical industry along the river, including giants like BASF and Bayer, depend on sufficient amounts of cooling water at the right temperatures for their plants. Low water levels can no longer guarantee this because the river heats up more quickly.

Ludwigshafen-based BASF is currently "optimizing its cooling systems" and has installed backup systems to prevent production stoppages this year, the company said in an email to DW.

Steelmaker ThyssenKrupp, by contrast, is working to improve its weather forecasting in order to be better prepared. The company told DW that it has set up an early-warning task force to ensure a steady supply of raw materials through "additional cargo space."

Both ThyssenKrupp and BASF said they were in the process of developing lower depth vessels under efforts to mitigate the effects of the worsening water situation in the Rhine. The steelmaker noted, however, that this was a "longer-term process." Under contingency plans, ThyssenKrupp wants to reduce loading and unloading times.

"That's a relevant issue because the number of vessels to be turned over in low water situations increases significantly. They arrive only half loaded and need to travel more frequently," the company said in their email. It hopes that the measure will ensure a 90% production target even if the Duisburg port's water level drops to an all-time low of 150 centimeters. 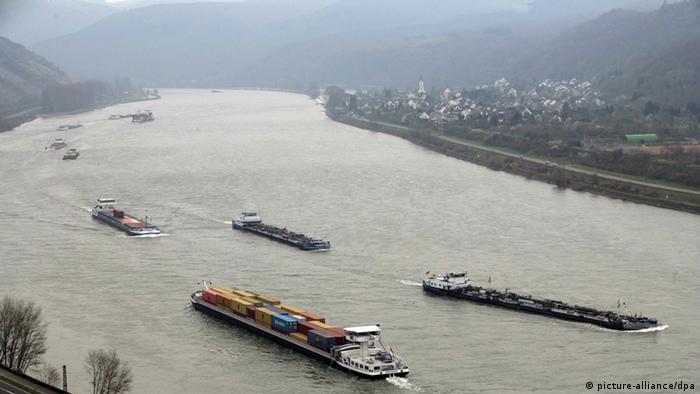 The threat of a repeat of the 2018 emergency has spurred the government into action. As companies like BASF have demanded measures to improve the infrastructure along the Rhine waterway, Transportation Minister Andreas Scheuer unveiled an action plan in July.

The 8-point catalog of measures includes a better early-warning system to help companies plan alternative transport options. In addition, the government wants to carry out several "building options" for which planning procedures should be "facilitated and speeded up."

Moreover, it aims to intensify public dialog to raise acceptance for controversial measures such as building new upstream dams.

"We need to act to ensure that waterway transportation remains stable even under the conditions of climate change," Scheuer urged, knowing that time is running out quickly.

According to an expert from the German river authority cited by television channel n-tv, winter precipitation in the upstream area of the Rhine was again well below normal between November and June. And the German weather service has forecast a third consecutive summer of exceptionally dry weather.

A ton of dead fish has been recovered near the German-Swiss border despite man-made 'cool pools' to prevent fish fatalities. Europe is in the throes of a heat wave that is impacting life in many different ways. (06.08.2018)