The leader of the Tibetan government in exile has said he continues to fight for the autonomy of Tibet. He called China's annexation of Tibet 70 years ago "violent" and "illegal." 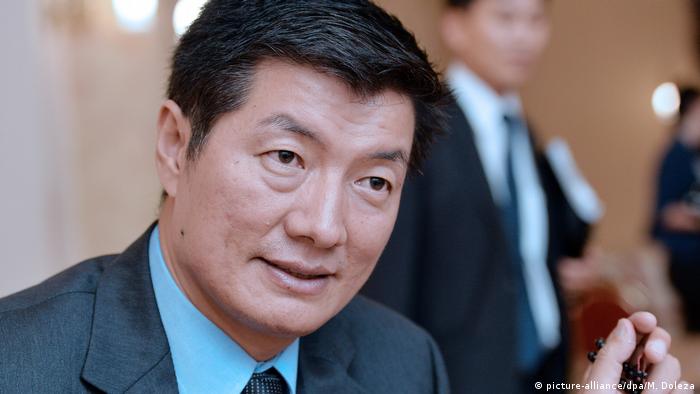 The head of the Tibetan government in exile, Lobsang Sangay, told DW on Wednesday that on the 70th anniversary of the Chinese annexation of Tibet, he was still fighting for autonomy.

"It is difficult because you are in exile and whatever happens around the world affects you, including the American presidential election or change in prime ministership of Japan, or any country in Europe," he said. "But you do the best you can to impact the world. And so far, for the last 60 years, we are still standing on our feet and we are still pursuing non-violence as our principle and genuine autonomy as our goal. So we are still here."

Sangay said the anniversary was a painful reminder for exiled Tibetans.

"The anniversary means the destruction, the illegal occupation and the violent take-over of the Tibetan people," he told DW.

The Tibetan government in exile, called the Central Tibetan Administration, was formed in 1959. Based in India, it is elected by the Tibetan diaspora and refugees.

It rejects the 17 Point Agreement and maintains that Tibet should be an autonomous nation, and seeks what it calls"the middle way." Sangay became elected leader of the government in 2011, after the Dalai Lama stepped down as political leader.

China maintains that Tibet has been part of China for hundreds of years and that its period of de facto independence in the 1900s was an anomaly.

Speaking to DW, Sangay alleged that China had long been planning to use Tibet as a launching pad to take over regions of India, Bhutan and Kashmir.

"Chinese leaders like Mao Zedong said Tibet is the palm that we take over, then we go out to the Five Fingers of Ladar, Nepal, Sikkim, Bhutan and Arunachal (Pradesh)."

Sangay was referring to a policy attributed to Mao in the 1940s, but Sangay and others have fears of its revival in recent years. Analysts have pointed to it as a basis for the Sino-Indian border dispute flaring up again this year.

Sangay said claims that China was only seeking stability in the region for the benefit of the Chinese, and that Tibetans were being repressed.

"When he says peace, it means assimilation of Tibetans, when he says stability it means the repression of the Tibetan people, the control of Tibet. That's what he means."

Speaking on Chinese investment in the region, Sangay said that it only benefited Chinese residents. China is reportedly planning to spend more than 1 trillion yuan ($147 billion / €125 billion) on infrastructure in the region, including major rail and road projects.

"This is an assimilation drive. So, yes, they talk about development. The question is, who benefits? And primarily Chinese people benefit from development projects in Tibet."

Editor's note: This story has been changed to replace "independence" with "autonomy," to more accurately reflect the status Sangay is seeking to preserve for Tibet.

The leader of Tibet's exiled government, Lobsang Sangay, spoke with DW about his new campaign aimed at resuming long-stalled talks with Beijing and softening China's handling of his homeland.

Six decades after suppressing an uprising in Tibet, Beijing praised its development efforts and slammed the Dalai Lama's exile government. The US and others say China has overseen widespread rights abuses in the region.

China intends to construct a railway between the western region of Tibet and Nepal's capital, Kathmandu. The deal with Nepal comes amid growing Chinese investment in the Himalayan country.