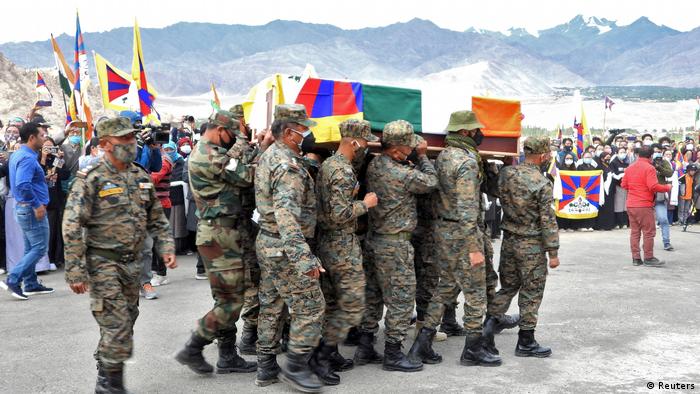 Nyima Tenzin, a Tibetan-Indian soldier, died on August 30 in a landmine blast near the Pangong Tso lake, which has become a site of dispute for Indian and Chinese militaries recently. The soldier, part of India's Special Frontier Force (SFF), a covert paramilitary unit, was killed while patrolling the India-China border in the territory of Ladakh.

The images from Tenzin's funeral on September 8, depicting his coffin draped in the Indian and Tibetan flags, received widespread media coverage in India.

It suddenly put the spotlight on the Tibetan community in the South Asian country and their contribution to the Indian army, at a time when tensions between India and China are running high.

"This incident is unfortunate, but it has finally got people talking about how China has captured Tibet. If Tibet was independent, then these border skirmishes would have never happened," Ngawang Tenzin, a Mumbai-based teacher, told DW. 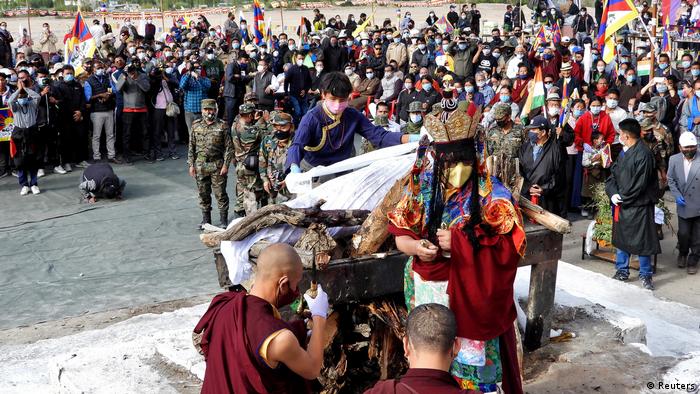 Tibetans in the Indian army

The SFF is a special paramilitary unit set up in 1962 that mainly recruits from the Tibetan community in exile in India. Since the Dalai Lama — the Tibetans' spiritual leader — fled to India in 1959 following an anti-Beijing uprising in Tibet and the subsequent Chinese suppression, over 100,000 Tibetans have made India their home. Some are now Indian citizens.

The SFF unit — controlled by the Research and Analysis Wing (RAW), India's external intelligence agency — is specialized in covert operations in mountainous terrain.

"Tibetans are used by the Indian army for mountain warfare, as we specialize in that. We are mountain people, which is why we adapt to that climate faster than people from mainland India," Tenzin said.

Palden Sonam, a New Delhi-based political analyst, believes that the death of the soldier has highlighted the Tibet issue and renewed solidarity among Indians for the Tibetan cause. Nevertheless, the political leadership and the army have so far refrained from commenting on the SFF.

"There was no statement from the Indian leadership or the army about the death of Nyima Tenzin. In fact, Ram Madhav, a BJP leader, who was present at the funeral and tweeted about it, later deleted his tweet. It's unknown whether the tweet was deleted because of pressure from New Delhi or Beijing," Sonam told DW.

"The Indian government seems tactful here. It lets the media report freely about the SFF and its role, while it remains silent," he added.

The Indian army's use of SFF along the border with China has raised concerns that the Chinese military could use Tibetan-Chinese soldiers to engage with the Indian military along the disputed frontier.

"China will definitely pit Tibetans against each other at the border. The lives of Tibetans will get affected," said Sonam.

Hua Chunying, the spokeswoman for China's Foreign Ministry, said at a news briefing recently that Beijing wasn't aware of Tibetans fighting for India, but that China was "firmly opposed to any country, including India, supporting the secession activities of Tibetan pro-independence forces or providing them with any assistance or physical space."

Ngawang Tenzin believes Nyima Tenzin's death and the subsequent funeral is a gentle reminder to Tibetans in India about who they are. "The cremation of the soldier in Ladakh with full state honors has happened for the first time and it's a big deal for us," he said. "When I was in school, on December 10, we used to go out and chant the slogan, 'Tibet Azaadi, Hindustan Suraksha,' (Free Tibet, Protect India). This slogan is very important for us (Tibetans)."

Since the Dalai Lama fled to India in 1959, many Tibetans have followed him to India. The Indian government, however, has so far not recognized Tibetans in the country as refugees and instead classifies them as "foreigners."

And New Delhi's support for the Tibetan government-in-exile, based in the northern Indian town of Dharamsala, seems to be determined by the state of India's relations with China.

New Delhi has often been accused of giving the cold shoulder to the Tibetans, only viewing them as a bargaining chip when political tensions with Beijing escalate and ignoring their contribution as soon as the situation calms down.

Dorje Rangzen, a New Delhi-based activist, believes that Tibetans are simply used as political pawns as and when required by India against China. "I was put in jail in July for protesting outside the Chinese embassy. I was beat up by the Indian police. My grandfather fought for India in the 1971 Bangladesh war. Why isn't our contribution being recognized by India?" he told DW.

"We (Tibetans) gave a lot to India, but India hasn't taken any action against China. Why is the Chinese embassy in India still open? A lot of us are in pain because of public apathy. The cops told me to go back to Tibet. I was called 'corona' by someone the other day," he added angrily.

"The death of a Bollywood celebrity gets media attention, but the plight of Tibetans doesn't. I am ready to fight for India, but are Tibetans important to Indians?" Rangzen questioned.

What's behind China and India's border dispute in the Himalayas?