Have Japanese youth lost the spirit of protest?

Young Japanese are less likely to protest than previous generations due to fears of violence and heightened life pressures. If they do feel strongly about an issue, they'll have their say in an online space. 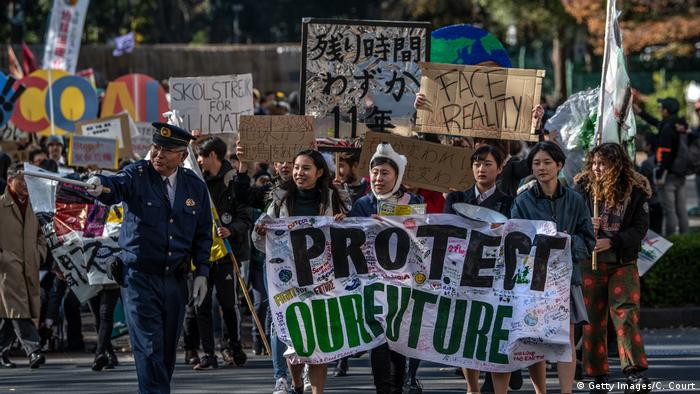 In the not-so-distant past, young Japanese people had a reputation for instigating violent protest movements.

Press images from the 1960s and 1970s showed confrontations between riot police and radical student groups in helmets and armed with bamboo poles. Batons were swung, improvised Molotov cocktails were hurled, and rioters' banners were torn down.

During these two decades, Japan saw a sharp rise in the number of demonstrations, about government policy, education reforms, the construction of Tokyo's Narita Airport, the US military presence in Japan, the Vietnam War and countless other issues.

The nation has a long history of violent insurrection against those in power.

One of the most shocking incidents of student violence occurred in October 1960, when an ultranationalist student named Otoya Yamaguchi, aged just 17 and wearing his school uniform under a jacket, managed to get on stage during a live television broadcast of an election debate in Tokyo.

Yamaguchi drew a short sword and stabbed Inejiro Asanuma, the chairman of the Japan Socialist Party. Asanuma later died of his injuries.

Yamaguchi committed suicide while awaiting trial and became a hero of right-wing Japanese politics. A graphic photo of the incident is considered one of the most famous images of the 20th century, and won a Pulitzer Prize.

Today, such an incident is virtually unthinkable, while the protests that do take place on the streets of Japan's cities are invariably small and peaceful. And they rarely involve young people.

As well as offering a contrast to the Japan of yesteryear, that lack of passion for philosophies or dearly-held ideals is in sharp contrast to the situations in other countries.

Young people were at the forefront of the Black Lives Matter campaign in the US, while students have been among the most vocal and aggressive opponents of Beijing's crackdown on civil and human rights in Hong Kong. Meanwhile, at just 18, Swedish activist Greta Thunberg has already become the face of the campaign against environmental degradation of the planet.

Kyoko Tominaga, an associate professor of social sciences at Kyoto's Ritsumeikan University, says her research indicates that interest in or motivation to take part in social movements is lower in Japan than in other countries.

Just 20% of young Japanese believe they can effect change in their society, the lowest figure among the nine countries surveyed, which included China, the US, South Korea and the UK.

"In our research in Japan, we asked about the protests in the 1960s and 1970s, but only 10% of people said they had a positive image of the violence that took place and the radical protesters, as opposed to more than 40% who had a negative image," Tominaga told DW.

The image of groups that were instrumental in the riots, such as Zenkyoto, a student organization that brought together communist and anarchists opposed to American imperialism, capitalism and even the tenets of Stalinism, was further tarnished when it emerged that internal power struggles had led to internecine violence and even deaths.

Tominaga says young Japanese are not apathetic in their outlook, but advances in technology have allowed them to take their protests into the virtual world.

"I think there are plenty of people who are interested in political or social issues and they are taking their protests online, to websites like change.org or promoting consumer activism," she said.

Another consideration for many is concern over job prospects and the need to study to get the qualifications they will need in an increasingly competitive labor market.

"I have opinions on issues, but everyone is too busy trying to get by, with studies or a part-time job to pay for university, that there is no time to take part in movements or protests," said Issei Izawa, a second-year student at a university in Tokyo.

"I also think that people look around them and realize that, actually, things could be a lot worse," he said.

"As a student, I'm getting an education that should help me get the job I want, so I will have enough money. It may not be a huge amount and I may never be rich, but it will be enough to live on," he added.

"I see a lot of middle-aged men working at 24-hour stores who have probably lost jobs that they thought were safe until their retirement, and now their futures look very uncertain, especially if they have a family," he said.

"I do not want to get involved in anything that might cause trouble as I have to think about my future."

Makoto Watanabe, a professor of communications at Hokkaido Bunkyo University, agrees that many young Japanese are wrapped up in their own worlds and really only worry about matters that immediately impact their lives.

'No point in protesting'

"The students that I speak with know about activism in other parts of the world, but they don't get involved because they don't think those issues affect them," Watanabe told DW.

"I would say that this problem actually goes back to their parents' generation," he added.

"These were the people who grew up during the years of Japan's 'bubble economy' after the years of demonstrations and violence, so they were satisfied with the new status quo that emerged in Japanese society."

"That makes young people today the second generation of those largely apolitical citizens who are happy as long as their mobile phones can be plugged in," he said.

"They do not protest or speak out due to a sense of despair. Nothing they say or do will change Japanese politics. Nothing will alter the control that big business exerts over life here. There is no point in protesting. Their world has shrunk."