An animated video posted by Japan's public broadcaster was slammed as "an offensive racist commentary" for using caricatures of African Americans to explain the background of the anti-police brutality protests in the US. 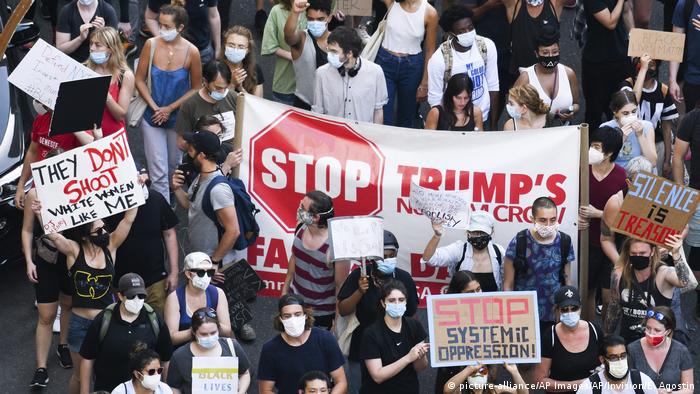 Japan's public broadcaster NHK faced backlash on Tuesday over an animated video on the anti-police brutality protests in the United States that used stereotypical depictions of African Americans — and for not mentioning police brutality.

The segment, which was posted on Twitter and aired on NHK's Sunday evening program "Sekai no Ima" (The World Now), featured a muscular black narrator who was drawn wearing a white tank top, Reuters news agency reported.

Other black characters in the background included a man with an afro hairstyle and sideburns, a musician in sandals playing a guitar, and angry women screaming with their fists raised.

The clip sought to explain the background of the US protests but did not mention police brutality or the death of George Floyd, who died after a white police officer kneeled on his neck for nearly nine minutes.

The post sparked outrage online, also drawing criticism from the head of the US Embassy in Tokyo, who said the depictions were "offensive and insensitive."

"While we understand NHK's intent to address complex racial issues in the United States, it's unfortunate that more thought and care didn't go into this video," Joseph M. Young, the interim head of the US Embassy in Tokyo, wrote on Twitter.

Baye McNeil, a Japan-based author and columnist with the Japan Times, posted a screenshot from the video on Twitter, saying that the video was "an offensive racist commentary" on black issues and the Black Lives Matter movement.

Journalist Grace Lee pointed out that the video was "aimed at children" and showed the broader need for awareness about racism in Japan as well as in South Korea. "Black people aren't caricatures," she added.

NHK removed the video on Tuesday after facing criticism, saying that it had been posted "with a lack of consideration."

"We apologize to those who were made to feel uncomfortable," NHK wrote on Twitter.

Alexis Ohanian, Sr., said he would use future gains from his Reddit stocks to "curb racial hate." He added that he wanted to be answerable to his black daughter. (06.06.2020)

Racism in Brazil: The death of a five-year-old reveals societal cleavages

Amidst the coronavirus pandemic and global anti-racism protests, the death of a five-year-old black boy in Recife has rocked Brazil. The case has sparked discussion about deeply ingrained societal racism in the country. (06.06.2020)