Greens force historic change of power in German state elections | Germany | News and in-depth reporting from Berlin and beyond | DW | 28.03.2011

Germany is to have its first Green state premier after the party triumphed in elections in Baden-Württemberg. Chancellor Angela Merkel's CDU suffered a resounding defeat in the state, one of two that held elections. 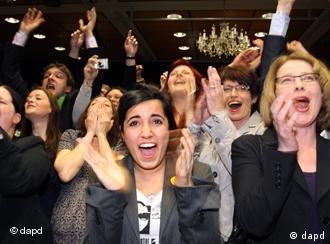 The Greens were the big winners on Sunday evening

The Greens garnered 24.2 percent support in the Baden-Württemberg election, doubling their share of the vote since the last state polls in 2006. This has paved the way for a Green party state premier, a first in German history. The Green party's state leader, Winfried Kretschmann, has been tipped as a likely candidate.

The Social Democrats (SPD) polled 23.1 percent, giving a coalition of the Greens and the SPD a majority. As predicted, the CDU took a severe drubbing, coming in with only 39 percent, a drop of 5.2 points. After heading the government in Baden-Württemberg for 58 years, this electoral slump was the party's second-worst showing in the state. 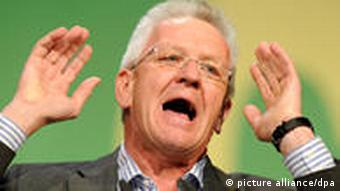 Green party co-leader Claudia Roth described the result as a new era for her party, saying the electorate had "written history." Roth also sought to put more distance between her party and the CDU on Monday, saying the Christian Democrats had alienated themselves through their nuclear and social policies.

The losses have sparked a round of soul-searching within the CDU. Speaking in Berlin on Monday, Merkel said the election defeat in the conservative stronghold of Baden-Württemberg after nearly six decades of rule was painful and would take a long time to overcome. She said the large swing to the Greens could "very clearly" be tied to the ongoing crisis at the Fukushima nuclear plant in Japan.

Many Germans are wary of Merkel's surprise policy flip-flop in the wake of Japan's nuclear crisis.

On Monday Merkel said the government would stick to its timetable for assessing Germany’s nuclear power plants, despite nationwide protests over the weekend signaling widespread voter discontent with federal energy policies.

Following the election result, Stefan Mappus, the regional chairman of the CDU party in Baden-Württemberg, resigned from his post.

SPD state chairman for Baden-Württemberg, Nils Schmid, said his party would "work to bring together economic reason and social cohesion" in the state. 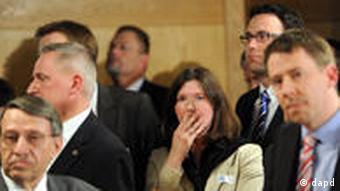 Social Democrat leader Sigmar Gabriel, meanwhile, has used the election results to call for joint discussions on a new energy policy. He said voters had sent a "clear signal" in favor of a nuclear phaseout, which, he said, could be achieved by 2020.

The Free Democrats (FDP), partners with the CDU at the national level, polled 5.3 percent in Baden-Württemberg, leaving the two parties short of a majority to form a coalition. The liberals saw their support slide 5.4 percent.

In Sunday's other election in Rhineland-Palatinate, the FDP failed to clear the 5 percent hurdle for entering the state legislature.

Vice-Chancellor and leader of the FDP Guido Westerwelle said his party had understood the clear message from voters in Baden-Württemberg and Rhineland-Palatinate. He said the liberals would address the fallout from the elections by the next party conference in May.

"It cannot be business as usual," he said. "There can be no simple continuation."

Rainer Brüderle, the regional chairman of the FDP in Rhineland-Palatinate, resigned on Monday, taking with him the entire regional board. FDP party Treasurer Jürgen Creutzmann said they wanted a new start. Brüderle will keep his post on the national level as economics minister in Chancellor Merkel's cabinet.

The Left party took home 2.8 percent of the vote in Baden-Württemberg and 3 percent in Rhineland-Palatinate, leaving them out of the state parliament as 5 percent is required for representation. 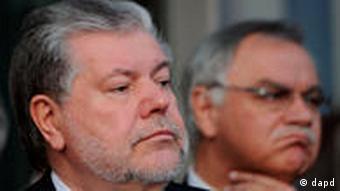 Beck is set to retain power after heavy losses

In the smaller state of Rhineland-Palatinate it was the SPD, not Merkel's CDU, that was the main casualty of anti-incumbent sentiment on election day, although state Premier Kurt Beck is to retain power.

The SPD lost its absolute majority but remained the strongest party with 35.7 percent of the vote, a fall of 9.9 percent since the last state election in 2006. The Greens polled 15.4 percent, a 10.8-percent increase, securing representation in the state parliament after a five-year hiatus. Projections placed the CDU at 35.2 percent of the vote, a 2.4 percent rise on the previous poll.

The result could indicate a coalition between the SPD and the Greens in Rhineland-Palatinate as well.

The CDU's losses will make it even harder for Merkel to pass legislation in the Bundesrat upper house and likely prompt new calls for her to shore up her rightist credentials. Analysts have said her federal coalition, however, will likely survive.

Defeat in a key state election over the weekend represents a major setback for Chancellor Angela Merkel. She is now unable to sidestep the major political issue of the day. But, as Peter Stützle writes, all is not lost, (28.03.2011)

Elections in the eastern German state of Saxony-Anhalt could prove to be a setback for Chancellor Angela Merkel, whose conservative party is experiencing waning support. (20.03.2011)

Series of 2011 state elections could spell trouble for Merkel

This is a big year for state elections in Germany, and the voting kicks off this weekend in Hamburg. Chancellor Merkel's coalition could take a beating, as voters in seven states head to the polls in 2011. (19.02.2011)