Greens call for 'race' to be removed from German constitution

As tens of thousands in Germany flock to anti-racism protests, two prominent Green politicians have called for the term "race" to be removed from German discrimination law. "We need to unlearn racism," they said. 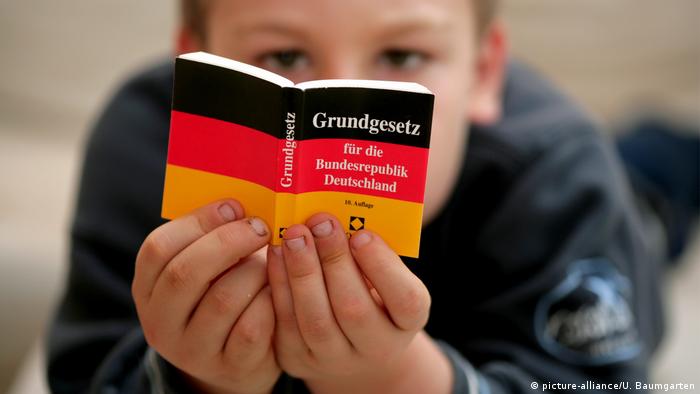 The term "race" should be removed from the German constitution, two leading Green politicians said Monday. In recent weeks, Germany has seen widespread anti-racism protests and dialogue around systemic racism in a German context following the police killing of unarmed black man George Floyd in the US.

"We have to unlearn racism," Green co-chair Robert Habeck and party vice-president for the state of Schleswig-Holstein Aminata Touré wrote in the German daily Taz. "Racism is also a German phenomenon. As a black woman and a white man we are affected differently by this, but it affects us all."

"The word race should be removed from the Basic Law," they added. "There is no such things as race, there are only people."

Germany's Basic Law is the country's constitution, penned in the immediate aftermath of World War II and the Holocaust, and so goes to great lengths to forbid the Nazi regime's worst crimes.

Habeck and Touré argue that the term race implies the existence of different categories of people, claiming it undermines another key clause of the Basic Law: "All people are equal before the law."

The politicians did not suggest a replacement word or an exact alteration.

The word "Rasse" in German, rendered as "race" in the official translation of German law, is described in the German Duden dictionary as dated and potentially discriminatory. It also has an ambiguity not as present for the word "race" in English; as it can also refer to different breeds of animals.

The German cabinet is planning to discuss all aspects of racism and xenophobia in a special sitting, Defense Minister Annegret Kramp-Karrenbauer told DW on Monday.

"It's a fact that discrimination exists in day-to-day life here in Germany as well," said the one-time possible successor of Chancellor Angela Merkel.

One of the key talking points will be possible laws to allow people to anonymously apply for accommodation or jobs, to remove possible discrimination based on name or appearance.

The Greens believe that sensitizing institutions and organizations to racism through training and education could offer a solution. Touré and Habeck cite training for the police on racism as key.