Graphic campaign puts violence in Kashmir in social media fore | News and current affairs from Germany and around the world | DW | 26.07.2016

Using photoshopped pictures of celebrities, a Pakistani group started an online campaign to highlight the violence currently rocking Indian-administered Kashmir. In India, the group is accused of pro-Pakistan bias. 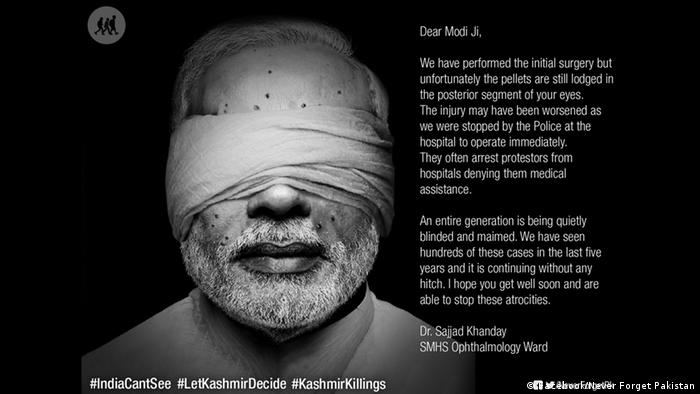 The organization recently made waves on social media after publishing a series of graphic photos meant to attract public attention to the recent violent clashes taking place in Indian-administered Kashmir.

Protests have rocked villages and cities across the region since July 8, when the Indian army killed the widely known Burhan Wani, a leader of the Pro-Pakistani separatist group Hizubul Mujahideen - considered a terrorist group by India, the European Union and the United States.

All display visible scars and bandages as a result of alleged wounds sustained from projectiles shot by the pellet guns - also known as air guns - used by Indian authorities in response to the numerous and often violent demonstrations that followed Wani's death.

The Pakistani group denounces the use of these weapons saying it has led to several critical injuries and even deaths. "Scores have been blinded, several killed and hundreds injured by what India describes as a 'non-lethal' weapon," the group says in a description to its campaign.

The pictures, published on the group's Facebook and Twitter profiles, come with messages, which the group says were written by actual victims of pellet gun wounds, describing the alleged atrocities denounced by the organization.

'You know these faces'

In their Facebook post, Never Forget Pakistan explains the use of celebrities' faces by arguing that since everyone in India is likely to know them, it might make the plight of real victims "more important."

In an email to DW, Jibran Nasir, a leading campaigner in the group, explained why they had chosen these particular people. While PM Narendra Modi was "an obvious choice," Bollywood celebrities were chosen because they are "cultural icons" who have taken stands on other issues but not on Kashmir, Nasir says.

As for Zuckerberg, Nasir explained he was selected to "highlight the consequences of internet censorship," as recent reports, including some by Indian academics and journalists, have accused Facebook of censoring posts related to the violent confrontations in Kashmir.

And their campaign did hit a nerve on social media: On Facebook, the original post containing all 11 pictures garnered over 12,000 likes and got more than a thousand comments.

On Twitter, the campaign, propelled by the hashtags #IndiaCantSee and #LetKashmirDecide, was retweeted 252 times, also garnering positive responses from a number of users who support an independent Kashmir:

However, the response was not entirely positive, particularly on Facebook. Several users - many of them Indian - responded by accusing the group of being biased in favor of Pakistan, which controls a part of the Kashmir region where there are also accusations of political repression.

Nasir said his group did not "carry any misplaced sense of nationalism," adding that they are "amplifiers" of the voice of the Kashmiri people.

The accusation of bias was also repeated in the Indian press that eventually covered the initiative, with the widely read Times of India even condemning the initiative for "dragging" Indian celebrities into the "Kashmir row." None of the people in the photoshopped pictures responded to the story.

Why Kashmir needs a political solution

As violence rages on in Kashmir, New Delhi and Islamabad have upped the ante. DW analyzes what is at stake in the conflict-marred region, and why the dispute continues to affect the ties between India and Pakistan. (14.07.2016)

The death toll in the restive Indian-administered territory has risen to at least 23 as protesters defy curfews and clash with security forces. India has struggled to keep order after the killing of a guerilla leader. (11.07.2016)