The death toll in the restive Indian-administered territory has risen to at least 23 as protesters defy curfews and clash with security forces. India has struggled to keep order after the killing of a guerilla leader. 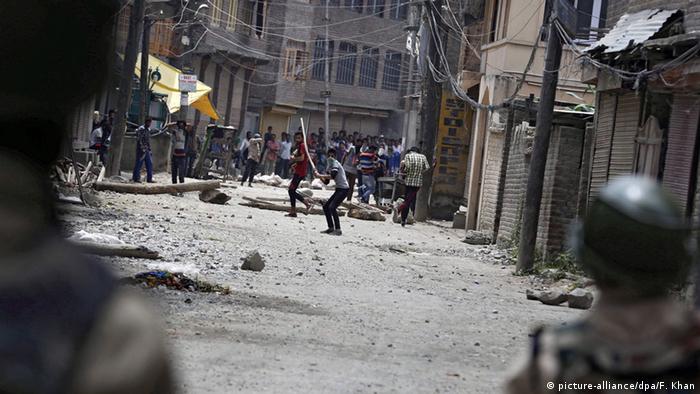 Indian authorities continued to struggle to contain protests by Kashmiris on Monday as at least 23 people were killed in weekend demonstrations. Youths defied a curfew to rally in the streets against the killing of a top separatist rebel leader.

India has imposed an indefinite lockdown in disputed Kashmir a day after security forces killed a top rebel in the Himalayan region. Several people have been killed and injured during protests. (09.07.2016)

Life in the Kashmir Valley is at a standstill for a third day: hundreds of demonstrators were hurt as government forces repeatedly open fire on protesters in the worst civilian unrest since 2010.

The region erupted in protests over the weekend after Indian troops killed Burhan Wani, the young leader of Kashmir's largest rebel group, Hizbul Mujahideen, which has been fighting since the 1990s against Indian rule.

Wani, in his early 20s, had become the iconic face of Kashmir's militancy, using social media to rally supporters and reach out to other youths like him who had grown up amid hundreds of thousands of Indian armed forces deployed across the region.

Anti-India sentiment is strong throughout India's portion of Kashmir, a region of 12 million people, about 70 percent of whom are Muslim. Many resent the deployment of hundreds of thousands of Indian troops, and openly voice support for rebels who have been fighting since the 1990s to demand independence or a union with neighboring Pakistan.

From rebel leader to martyr

Around 300 people have been injured, including nearly 100 police, and hospitals say they are overwhelmed. Most victims suffered gunshot wounds or teargas inhalation.

The Jammu and Kashmir Coalition for Civil Society alleged that police had attacked ambulances taking the wounded to hospital.

The state government has called for calm and has also cut off internet and mobile phone networks to try to stop the protests spreading.

Kashmir has been divided between rivals India and Pakistan since 1947, but both claim the territory in its entirety. Tens of thousands of people - mostly civilians - have died in the fighting since 1989.