India has imposed an indefinite lockdown in disputed Kashmir a day after security forces killed a top rebel in the Himalayan region. Several people have been killed and injured during protests. 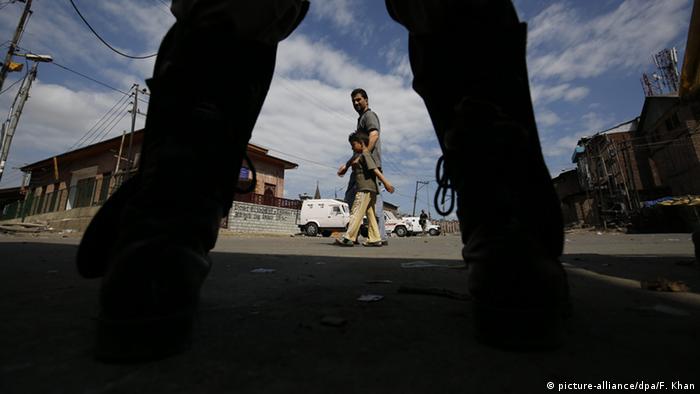 A curfew was imposed on much of Kashmir Saturday, including in the capital, Srinagar. Hindu pilgrimages were also suspended as tension flared in the Muslim-majority region following Friday's killing of a top militant in a gunbattle with police.

Officials said at least three civilians have been killed and scores injured in clashes with security personnel as protests erupted across the region,

Two rebel comrades of Wani were also killed in the gunbattle, he said.

The youthful face of the guerilla movement

Wani, who was in his early 20s, had become a household name in Kashmir over the last five years, producing video clips and photos that were widely circulated on social media. He broke with the past practice of covering his face, and his boyish good looks made him the guerilla group's "poster boy."

Last month, Wani had sought to assure Hindu pilgrims that separatist rebels would not target them when they visited holy sites in the region. "They are our guests," he said, contradicting a report by Indian security services warning Hindus they could be targeted by militants.

But as news of his death spread, tens of thousands of people took to the streets in several places in Kashmir, denouncing the killing and chanting slogans against Indian rule.

As Pakistan commemorates the anniversary of the 1965 war against India, DW examines why the Kashmir dispute continues to affect the ties between the neighbors and who are the beneficiaries of the Indo-Pakistani conflict. (06.09.2015)

Thousands of Indian troops deployed across much of the region as popular anger smoldered over a decree that authorities would prevent a public funeral for Wani.

Protesters already turned out to block main roads and the gateways to Srinigar after a call for civil disobedience was put out by top separatist leaders. Indian authorities responded by placing some these leaders under house arrest.

Most people in the mostly Muslim region have long resented the Indian presence, and support rebel demands for independence or merging with Pakistan.

Around half a million Indian troops are deployed in the border territory, which is divided between India and Pakistan but claimed by both in its entirety.