Grannies for Future: Youth have ′no chance′ without old people | Environment | All topics from climate change to conservation | DW | 03.09.2021

Grannies for Future: Youth have 'no chance' without old people

When the scale of the climate crisis was brought home to Cordula Weimann, she decided to make some changes. She used to drive a sports car and take flights on vacation. Then she launched the Grannies for Future movement. 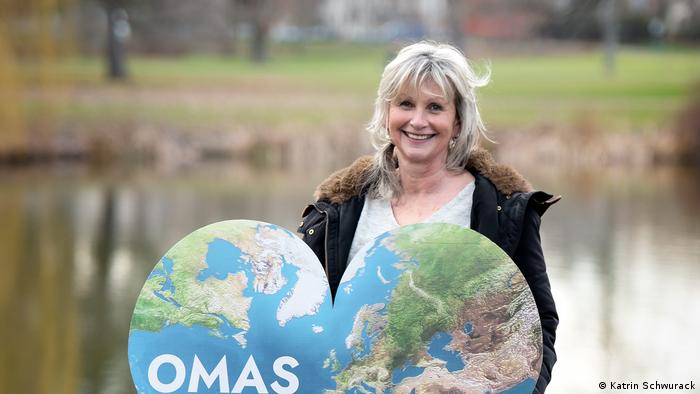 Cordula Weimann didn't opt for a quiet retirement. Instead, the 62-year-old grandmother has embarked on a mission to educate her fellow seniors about their impact on the planet.

"Of course, we older people have been contributing to [climate change] for a long time," she says in an interview with DW's environment podcast, On the Green Fence.

"But you are only really guilty if you know that what you are doing is wrong. And we had not been told just how devastating our consumerism is to this planet. You can't blame us for that."

How young and old see the climate crisis

The Leipzig-based mother of three — who also has three grandchildren — founded Omas for Future (Grannies for Future) in 2019 in support of the global youth climate movement, Fridays for Future.

"I said to myself, 'If the old people don't get on board, the youth won't have any chance of making it.' And that's how Omas for Future came about."

With the group, she's hoping to raise climate awareness among the older generations and motivate them to take concrete steps to shrink their carbon footprints — for the sake of their kids' and grandkids' future.

Germany's aging population means older citizens will have the biggest say in the upcoming federal elections on September 26. Of the 60.4 million eligible voters, only 15% of them are under the age of 30. Around 60%, on the other hand, are over 50.

"It's really a sad fact that we grandmas and grandpas decide about the future of our children — not only with the election, but also with our daily consumer behavior," Weimann says.

"It is certainly also a fact that when the children are out of the house and retirement is just around the corner, many older people say, 'Now I'm going to treat myself.' And then they travel the world more, drive the big car, and consume things that they wouldn't have otherwise treated themselves to."

Weimann, whose open, friendly face is framed by shoulder-length silver hair, is speaking from experience. Before turning to environmental activism, she was an entrepreneur based in the city of Paderborn, renovating old buildings and turning them into homes. She had a convertible sports car and took flights when she went on holiday. With three children and a career, her thinking was, "'If I already work so much, then I want to have something from it — to treat myself.' The more I worked, the more I needed this balance. I also thought it was chic to ride in a convertible." 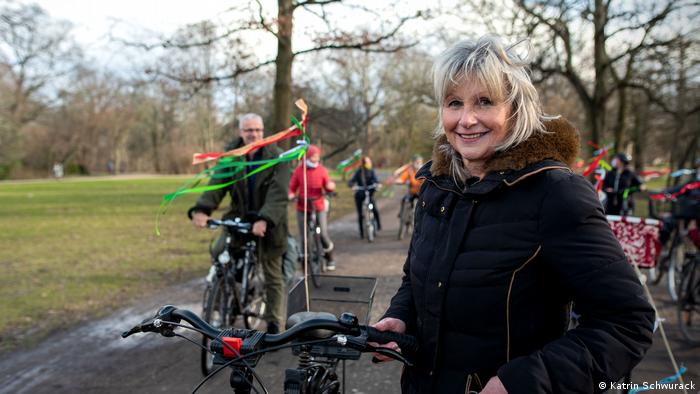 Weimann grew up in the Lower Rhine region in Germany's west, and says she's always cared about the environment and nature. But, in recent years, the more she learned about how her consumption and lifestyle were harming the planet, the more she saw the need for change. She remembers reading some particularly sobering numbers in 2017 that brought the gravity of the crisis into sharp focus.

"I didn't know how immense the species extinction is, that 75% of the flying insects are gone, 68% of our songbird species have been reduced," she says. "I didn't know that in concrete numbers."

Weimann says she now lives in a carbon-neutral, wooden house in Leipzig. She also ditched her sports car for an electric one. She doesn't purchase new clothes anymore as a rule, eats little meat and buys organic produce as much as possible. She also doesn't fly, even though she has children abroad.

"And if I were forced to fly for whatever reason, I would certainly compensate by investing in carbon offsetting projects," she adds.

It's been a gradual transition. Now Weimann is trying to help others in her age group do the same. But she admits there are some challenges, for example, convincing a generation that has already lived through — and solved — previous crises such as the Cold War and the hole in the ozone layer that climate change is different.

"And that's exactly the danger, because this time it's really serious! It's not just global warming; it's also our species' extinction, which may threaten us even more if we don't stop it immediately."

Since she launched the movement, 40 regional Omas for Future chapters have been set up across Germany. And despite the "Omas" in the name, they encourage Opas, or grandpas, to get involved as well.

The group attends climate rallies and runs campaigns to reach out to older citizens, who aren't as active on social media as younger people. Weimann also hosts a podcast with tips for how to live a more climate-friendly life — for example, by switching to green electricity or recycling clothing.

'We have to build bridges' between generations

Unlike the Fridays for Future movement, which emerged in August 2018, the Omas put less emphasis on lobbying for policy change, and more on the power of individual actions. Weimann also stresses that it's not about apportioning blame or taking things away from people.

"Omas for Future don't advocate veganism, which is championed by some of the young. Of course, we should eat far less meat. But we aren't dogmatic and say everyone must be vegan," she says.

"Attacking somebody and telling them what to do is problematic. But having said that I can also understand the anger of young people. We have to build bridges, come together and talk on a personal level without fear."

While the climate movement is often seen as being dominated by young activists, Weimann says it's not so black and white. The Omas for Future movement is proof of that.

Weimann would like to see the group continue to grow — and not just in Germany — to spread the message that spurred her to take action in the first place: "What drives me is the love I have for my children. And what I can do now for them and their future is to save as much as I can."

You can listen to the latest episode of On the Green Fence, featuring Omas for Future founder Cordula Weimann, here or wherever you get your podcasts.

Global CO2 emissions continue to rise despite the urgent need to decarbonize. What does this failure to tackle climate change mean for climate activism? Is radicalization the next step?

Germany's demographic setup favors the older generation in this year's crunch election. More than half the eligible voters are above the age of 50 and only 15% are below the age of 30. What does this mean for intergenerational dialogue and future environmental policy? Are older people in Germany really less interested in the environment than the Friday For Futures generation?