Fact check: What can I do for climate protection? | Environment | All topics from climate change to conservation | DW | 01.07.2021

Fact check: What can I do for climate protection? 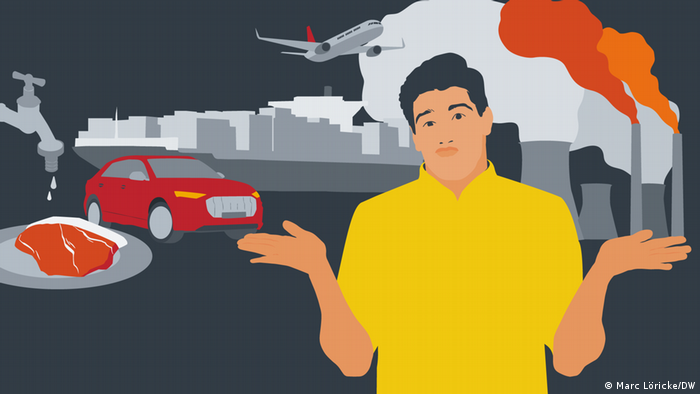 Do my personal decisions really matter for the climate? DW looks at the facts

China and the United States are the world's biggest emitters of CO2, according to the EU's emissions database. With this in mind, many people are asking themselves whether individuals can actually make a difference if they restrict themselves and reduce their CO2 consumption.

It's often argued that these small changes do not have an effect. However, Germany-based climate researcher Stefan Rahmstorf, a member of the scientific advisory board of the educational platform klimafakten.de (climate facts), says this is not a logical argument. "You could, of course, divide the world into 50 groups, each of them causing 2% of global emissions. Does it therefore follow that no one has to do anything?" he asks, in a blog post for the science magazine Spektrum.

When looking at people's personal contribution to climate protection, it makes sense to compare relative CO2 emissions per capita. In 2019, the US was way ahead on this, with 15.52 metric tons of CO2 produced per person. The figure for China was 8.12 tons, whilein Germany it was 8.5 tons. The global average is just under 5 tons.

This pattern is also reflected in the ecological footprint per person, a unit of measurement that calculates how much land someone needs to provide the resources he or she requires. Criteria include origin and type of food consumed, and the mobility and production conditions of consumer goods. In the US, the average is 8 global hectares per inhabitant; in Germany, 4.7 global hectares; and in China, 3.7 global hectares.

In comparing Germany, China and the US, we see that even if you do have a low individual ecological footprint, that doesn't mean you should leave climate protection to others. Looking at its individuals, China's 8.12 tons of emissions per person does not seem so disastrous. But multiply that by the number of its inhabitants, and you see the impact of China's 11.5 billion tons of greenhouse gases. In absolute terms, China is by far the world's biggest emitter of greenhouse gases, according to the EU's emissions database EDGAR. It sends more than twice as much CO2 into the atmosphere as the US, which emits 5.1 billion tons.

Even so, the responsibility to act does not begin and end with the big two. Klimafakten.de calculates that "even if, starting right now, neither China nor the US emitted so much as a single tonne of carbon dioxide, CO2 output in the rest of the world would be still so high that by 2050 total emissions would exceed the maximum quantity allowable if global warming is to be kept below the limit of 1.5 degrees."

More than half of annual emissions come from other countries, the portal explains — and so, it concludes: "All countries must participate."

Given the high CO2 emissions per capita in Germany, the issue of personal resource consumption is gaining political importance. Around 90 million metric tons of the estimated 740 million tons of greenhouse gases emitted in Germany in 2020 came from private households. This includes emissions created by heating and cooking, for example, as well as from electricity for household devices.

This sector has an important role to play in achieving climate protection targets — as does transport, which last year accounted for 146 million tons of greenhouse gases, or around 20% of the total. The largest emitter is still the energy production sector, with 221 million tons.

Consequently, Germany has many initiatives aimed at helping consumers reduce their energy consumption. The most important tool for this is the federal environment agency's CO2 calculator. 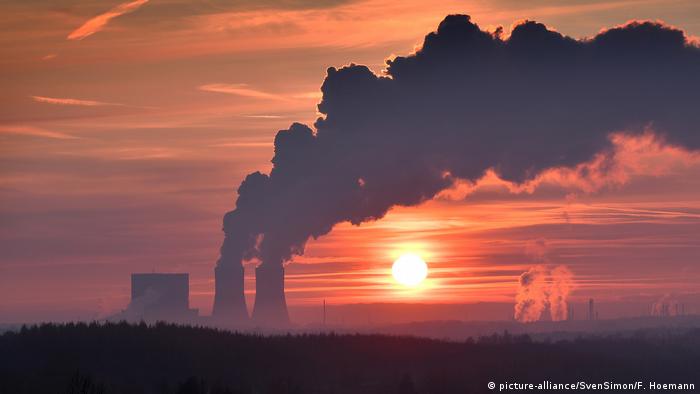 Coal-fired power plants are being phased out: The energy industry is Germany's largest sector emitting of greenhouse gases

Using this tool, a team from the Brandenburg University of Technology calculated, for example, that 6% of heating energy in buildings could be saved if the heating was turned down 1 degree Celsius in winter.

Electricity consumption in private households also has great savings potential. According to the German Federal Ministry for the Environment, Nature Conservation and Nuclear Safety (BMU), CO2 emissions across Germany could be reduced by around 15 million tons per year, and around €10 billion ($12 billion) could be saved, if individual electricity consumption were consciously reduced — particularly with high-energy devices.

Another area in which each individual can contribute to climate protection is by modifying their behavior is the transport sector, which last year emitted 146 million tons of greenhouse gases. In its "Eco-Tips," Brandenburg University of Technology uses the example of a return flight from Frankfurt to Tenerife, which it has calculated as being as damaging to the climate as using a car for an entire year.

Diet is also a crucial issue. If Germans reduced their annual meat consumption from 88 kilos to 46 kilos of meat per head, CO2 emissions would fall from 15 million to just under 8 million tons, according to the German Nutrition Society's calculations, which were published in the report, Meat Atlas 2021.

So do giving up meat and riding a bike make any difference in the battle for sustainability and climate protection? A look at the facts concludes that every individual's contribution has an effect, and should not be downplayed by comparing it to those of bigger CO2 emitters.

However, individual measures need to be put into a specific context if they are to have a political impact that can lead to a significant change. For Robbie Andrew, a scientist at Norway's CICERO climate research institute, the most effective way is to communicate to political leaders that this is an important issue for society. "And if that means voting a certain way or if it means demonstrating through our economic actions — in other words, what we buy and what we refuse to buy — as long as those messages are salient — they're visible," he said to DW, adding that this is why the "Fridays for Future" protest movement is important for many people.

And Mathis Wackernagel, the founder and president of the Global Footprint Network, sees climate protection as self-protection. "Waiting for China or the United States isn't going to help," he told DW. "It's better to make your own boat climate-proof, which will increase your own chances for the future."