More than half the area of the Greek island of Evia was burned, in the country's worst fire wave since 2007. Meanwhile in the US, California's largest single wildfire is still not contained. 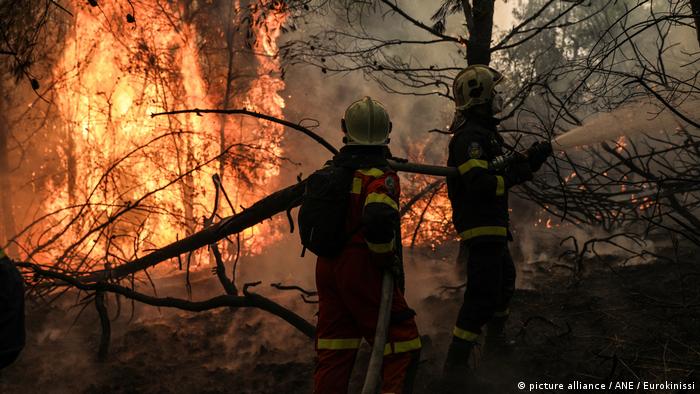 The European Forest Fire Information System (EFFIS) said Wednesday that nearly 100,000 hectares of forestry and farmland had burned in Greece for the past two weeks.

It was the worst wave of wildfires since 2007. The fires were fueled by an extraordinary heatwave at the beginning of August. The extreme conditions of heat and dry weather this year along the Mediterranean have been linked to climate change.

Greece's second biggest island of Evia bore the brunt of the damage caused by the fires, with more than half of its total area burned.

Evia's thick pine forests, which were still ablaze on Wednesday, were largely reduced to ash in the northern part of the island.

"They are still very destructive today everywhere, and have a rare high level of intensity," Mark Parrington of Copernicus, the European Climate Change service, said of the fires in Greece.

Prime Minister Kyriakos Mistotakis said the 586 fires that swept through several regions of the country in just a few days was "a natural disaster of exceptional magnitude."

Read on for a summary of wildfires currently burning across the world.

Firefighters, troops and civilian volunteers continued to battle blazes on Wednesday in forests across northern Algeria. The fires have left at least 65 people dead.

Twenty-eight of those killed were soldiers deployed to help emergency services tackle the more than 50 fires that broke out on Tuesday, state television reported.

The fires have been fueled by high winds in very dry conditions created by a heatwave across North Africa and the wider Mediterranean, fire official Youcef Ould Mohamed told the state-run APS news agency.

The largest single wildfire in the US state of California's recorded history continued to grow on Wednesday. Burning through bone-dry trees, brush and grass, the Dixie fire has destroyed at least 1,045 buildings, more than half of them homes in the northern Sierra Nevada.

The Dixie Fire began on July 14 and has covered 783 square miles (2,027 square kilometers). As of Wednesday, it was only 30% contained, according to the California Department of Forestry and Fire Protection.

Heat waves and historic drought, which have been tied to climate change, have made wildfires harder to fight in the Western region of the US. The US west has become much warmer and drier in the past 30 years.

Authorities in the western state of Montana have now ordered evacuations as a wind-driven blaze spread toward several remote communities on Wednesday.