Former Germany midfielder Mesut Özil has criticized Muslim countries for not speaking up for minorities subjected to abuse in China. More than 1 million people have been sent to reeducation camps in the Xinjiang region. 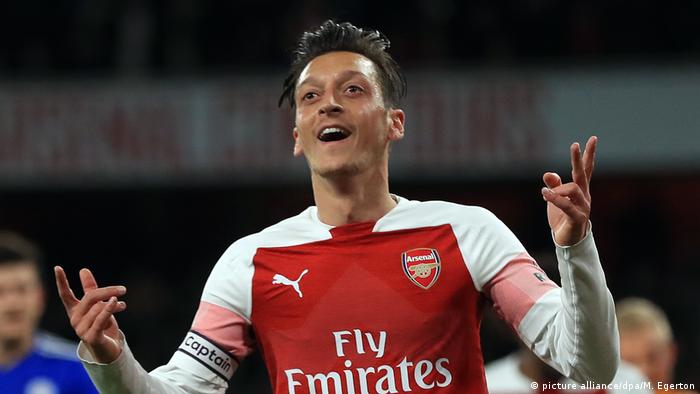 Former Germany international footballer Mesut Özil expressed support for Uighurs in Xinjiang, China, on Friday and criticized Muslim countries for their unwillingness to speak out on the poor treatment faced by the Uighur people, a Muslim minority group.

"Qurans are being burnt. Mosques are being shut down. Muslim schools are being banned. Religious scholars are being killed. Brothers are forcefully being sent to camps," the Arsenal player posted in Turkish on Twitter and Instagram.

Beijing has received international condemnation for creating a series of camps in Xinjiang in northern China aimed at homogenizing the Muslim group to reflect China's majority Han culture.

Arsenal, Özil's current team, distanced itself from the player's remarks.

"The content published is Özil's personal opinion," the club said in a statement. "As a football club, Arsenal has always adhered to the principle of not involving itself in politics."

Over a million Uighurs and people of other mostly Muslim minorities have been rounded up in the camps in the tightly controlled region, according to human rights organizations and other experts.

Turkey, which takes its name from Turkic people who migrated from central Asia, is home to a Uighur community as well and has regularly highlighted the plight of the Muslim group.

Özil added: "What will be remembered years later would not be the torture by the tyrants but the silence of their Muslim brothers."

The 31-year-old has become a controversial figure, particularly in his homeland, Germany, in recent years. In 2018 he was photographed with Turkish President Recep Tayyip Erdogan, raising questions about his loyalty to the national team on the eve of the World Cup in Russia. Germany made an early exit from the tournament and Özil subsequently quit the national team, accusing German football officials of racism.

Earlier this year, the attacking midfielder courted further controversy when he invited Erdogan to his wedding as his best man.

Former Germany midfielder Mesut Özil has criticized other Muslims for not speaking up for China's Uighur minority. More than 1 million people in the western province of Xinjiang have been sent to re-education camps. (15.12.2019)

Former Germany national team player Mesut Özil had dinner in Istanbul with Turkish President Erdogan. Özil has addressed the disrespect and discrimination he faced from the German public and German Football Association. (19.05.2019)

Ilkay Gündogan faced widespread criticism after a recent photo op with the Turkish president. The Germany midfielder has described suggestions that he "doesn't live by German values" as a "heavy blow." (06.06.2018)