Germany's Merkel arrives in UAE to talk trade and refugees

While in Abu Dhabi, Merkel will discuss the upcoming G20 summit and urge leaders to do more to take in refugees. But an Emirates official has warned that Germany should be vigilant about possible security risks at home. 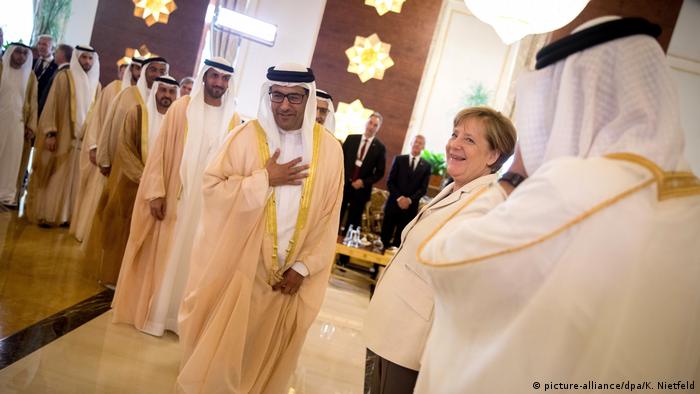 German Chancellor Merkel has arrived in the Saudi port city of Jeddah to hold talks with the kingdom's authorities. Women's rights are high on her agenda following massive criticism of Riyadh's UN women's body role. (30.04.2017)

Merkel to talk business during trip to oil-rich nations

During her trip to Saudi Arabia and the United Arab Emirates, the German chancellor is to have talks about larger economic cooperation. Her hosts have seen their domestic economies suffer from dropping oil prices. (28.04.2017)

German Chancellor Angela Merkel arrived in the United Arab Emirates (UAE) on Monday for talks with officials ahead of the Hamburg-hosted G20 summit in July.

She was greeted by Crown Prince Sheikh Mohammed bin Zayed Al Nahyan in Abu Dhabi and is due to discuss key topics including women's empowerment and climate change.

Merkel is also being accompanied by a delegation of German business leaders who are looking to strengthen ties in the Gulf region. The UAE is Germany's most important trade partner in the Gulf, followed by Saudi Arabia.

Over 900 German companies work in the rich, seven-state federation - 600 of which are in Dubai. Last year, Germany made trade surplus of 13.6 billion euros ($14.8 billion) in the UAE.

Although the focus of the meetings is on prepping the upcoming G20 summit, Merkel is also urging leaders in the Gulf region to take in more refugees and provide humanitarian aid for those fleeing conflict in the Middle East.

The UAE is interested in working with Germany to aid refugees and fight poverty, Ali Abdullah al-Ahmed, the UAE's ambassador in Berlin, told news agency DPA ahead of Merkel's visit.

He also warned, however, that Germany should remain vigilant about radical Islamic preachers at Mosques.

"It is very important to be aware of what type of message preachers are giving to immigrants in mosques in Europe," al-Ahmed said.

He said that although Merkel's decision to take hundreds of thousands of refugees from Muslim-majority countries was a humanitarian gesture, it was not without risks.

When asked about calls from German politicians for the UAE to take in more refugees, al-Ahmed noted that the country financed a refugee camp in Jordan and is helping Greece build its own camp. He also said his country committed to accepting 15,000 Syrian refugees over the next three years.

Germany has taken in over one million asylum-seekers since 2015, many of whom come from Syria, Iraq and Afghanistan.

During Merkel's visit to Saudi Arabia on Sunday, her first to the kingdom in seven years, Merkel held talks with King Salman and other leaders, pressing them on women's rights and the war in Yemen.

She also told Saudi officials that Europe is still interested in forging a free trade agreement with the Gulf states. The two sides signed a number of memorandums to deepen cooperation in the areas of technology, energy and business, the official Saudi Press Agency reported.