Germany′s Libya policy reveals a nation in transition | World | Breaking news and perspectives from around the globe | DW | 12.09.2011

From its controversial abstention on Libya to the formation of its role in Libya's post-conflict reconstruction, Germany is struggling to reconcile the way it sees itself with the way its allies have come to see it. 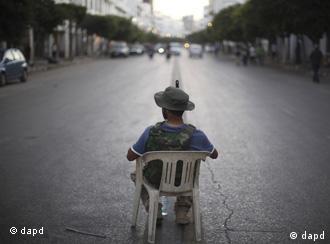 Germany's reticence in Libya has left it a little isolated

Germany's foreign minister, Guido Westerwelle, might be the most unpopular figure in the country's political landscape today.

The single most controversial issue of his tenure? Germany's approach to Libya during the Arab Spring. But German foreign policy analysts and advisers within Westerwelle's party say that conflicting notions of German identity and structural problems within Europe are the primary factors causing the loss of confidence - both among the German public, and abroad.

On March 17, 2011, the United Nations Security Council voted to establish a "no-fly zone" over Libya. Germany declined to offer its support to the measure, and to its strongest traditional allies of France, Great Britain, and the United States. Instead, by abstaining as a result of its conflicted opposition to military intervention, Germany found itself in the unfamiliar company of China and Russia.

According to sources closest to the formulation of Germany's decision to abstain, the country's ongoing involvement in Afghanistan dominated the discourse: a war-weary German public has shown increasing disapproval of their military's contributions to the coalition effort. And with key regional elections due less than two weeks later, Westerwelle's Free Democrats (FDP) were keenly sensitive to public opinion.

Westerwelle, who declined to be interviewed for this article, had hoped to conjure the example of former German Chancellor Gerhard Schröder, analysts say. In 2002, Schröder clearly stated his opposition to the US-led build-up to the war in Iraq, thus alienating a long-time international ally, but receiving a significant boost in domestic polls.

Germany's reluctance to get involved in another potentially long, ill-defined conflict was not the only factor at play. Running counter to that was Germany's longstanding public advocacy for an emerging international norm known as "Responsibility to Protect" (R2P). In a policy paper from 2006, Germany's Defense Ministry noted its expectations that R2P would form the basis for an increasing number of military interventions, and its "legitimation under international law" through the Security Council was "crucial."

"When it came time to put our ideals into practice on Libya, we didn't join. It was a very weird position," Edmund Ratka, an expert on Germany's foreign policy in the southern Mediterranean, told Deutsche Welle.

Since the fall of Tripoli, French President Nicolas Sarkozy has received widespread acclaim for the leadership role he played in mobilizing NATO forces to intervene in Libya. But in the days just before the intervention began, analysts say that Sarkozy's approach itself had alienated German policymakers.

"It was felt that this was a very spontaneous decision by a very impulsive president," Uli Finkenbusch, a foreign policy advisor with Westerwelle's FDP, told Deutsche Welle. 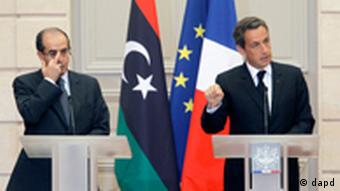 "Germans felt blackmailed. Sarkozy decided, and he said, in effect, 'follow me, or don't.' And Germany did not follow. He didn't ask Germany if he should recognize the National Transitional Council as the legitimate representative of the Libyan people, he just did it. And German politicians were furious about that," Ratka said.

And while Westerwelle would have preferred a more deliberative approach, Finkenbusch said, there were additional suspicions about France's motives. When the uprisings started in late 2010 in Tunisia, Sarkozy's government had famously offered security assistance to Tunisian leader Zine El Abidine Ben Ali. Days later, after Ben Ali's ouster, Sarkozy was seen to be standing on the wrong side of history. Germans perceived Sarkozy's quick moves on Libya as an attempt to "clear his tarnished image," Finkenbusch said.

In Sarkozy's decisive marshalling of forces, some analysts see a missed opportunity for Germany to play a leadership role in the advocacy of democracy in the region. Unlike France, Germany has no colonial history in North Africa. By comparison, France has maintained close ties with countries across North Africa, leading to some embarrassing images, such as photos from 2008, widely circulated this spring, showing Sarkozy embracing the now-deposed Ben Ali.

"Germany does not have any of that colonial baggage, and also not that bad conscience to make up for. We did think about developments in Libya beforehand, but we were clear that we did not need to make such an impulsive decision," Finkenbusch said.

One high-level adviser to Angela Merkel's Christian Democrats (CDU) said that Germany might have voted differently at the Security Council, had the process that culminated in the vote not moved so quickly. (He spoke on the condition of anonymity because his observation varied from the CDU's public stance.)

Many analysts agree that Libya exposed tactical and strategic delays within Germany's domestic political climate, as well as shortcomings in the ways that individual European states coordinate within transnational bodies, such as the body that acts as an EU-wide Foreign Ministry, the High Representative of the Union for Foreign Affairs and Security Policy.

"Coherence is the vision, but in reality - in practice - it is a two-track foreign policy," Annegret Bendiek, the Deputy Head of the EU External Relations group at the German think tank SWP, told Deutsche Welle.

Bendiek sees so-called high norms - values like the promotion of democracy and human rights - as being the ideas that EU-wide institutions represent on the global stage. But as individual states, European countries are sometimes more motivated by a second track of foreign policy concerns: things like energy security and political stability. Often, these two tracks are pursued at cross purposes, as some European states found during the Arab Spring. 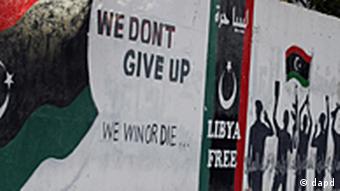 Libya will need concerted support from the EU

And as member states try to formulate overall EU policy in Libya's reconstruction phase, Bendiek expects a different type of clash in priorities among member states. Historically, the largest EU countries have differed fundamentally in the kinds of non-monetary assistance each is willing to give states outside the union.

Bendiek expects that Germany will be among the most willing to open its markets to goods and services from Libya by lowering trade barriers, but will be more reluctant to loosen its immigration policy for asylum-seekers or economic migrants. In places like France and Spain, Bendiek sees the reverse as being true, as there will be pressure to keep trade barriers high and there will be more willingness to open borders to immigrants. If one comprehensive EU policy is to be formulated on these issues, she says, strong leadership from the largest states - including Germany - will be essential.

Europe will be judged by the degree to which it facilitates state-building across North Africa in the coming years, said Ratka. "NATO has already declared that they do not want to do more than fight. That means once the hostilities are over, NATO must retreat and cede the floor to the UN. I think, then, it will be the hour of Europe."

Since its abstention at the UN, Germany has suffered debilitating reputational consequences, according to many in the foreign policy community. The greatest casualty, German policymakers fear, is their hope of one day gaining a permanent seat on the Security Council.

Ratka believes the underlying reason for Germany's mixed messages is its own search for identity: "Germans don't know themselves what they want. We are in favor of Europe, but we don't want to pay for it. We are in favor of saving Benghazi, but we do not want to participate. And the current leadership of Germany is hesitant, and looks closely at public opinion. I cannot remember a German government that cared so much about public opinion."

He added: "We are a trading nation. We want to make and sell cars. That's all. We don't want to put our flag somewhere. You know, we did that, and it turned out very badly."

'There's no space for those with any affiliation with Gadhafi'

While the hunt is on for Moammar Gadhafi, Libya's capital Tripoli is trying to adapt to its new-found freedom. Deutsche Welle spoke to Anwar Fayturi, the NTC's interim transport and communications minister. (09.09.2011)