′There′s no space for those with any affiliation with Gadhafi′ | World| Breaking news and perspectives from around the globe | DW | 09.09.2011

'There's no space for those with any affiliation with Gadhafi'

While the hunt is on for Moammar Gadhafi, Libya's capital Tripoli is trying to adapt to its new-found freedom. Deutsche Welle spoke to Anwar Fayturi, the NTC's interim transport and communications minister. 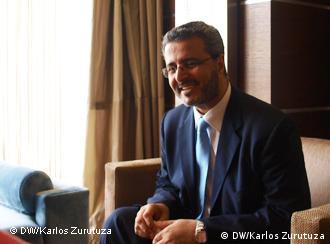 After spending the last 20 years in exile, Anwar Fayturi has just set foot in Libya to occupy a key position as the minister for communications and transport in the country's interim National Transition Council government. Deutsche Welle spoke to him just as members of the rebel authority landed in Tripoli.

Deutsche Welle: When will the National Transition Council finally be based in Tripoli?

Anwar Fayturi: Most of the executive is already here. Mr Mahmoud Jibril - the interim Libyan prime minister - arrived last Wednesday and the whole cabinet as a whole will be based in Tripoli by this week.

Regarding the institutions, do you have the feeling that you need to start from zero?

The infrastructure is already there but you have to understand that there's no space for those with any kind of affiliation with Gadhafi or involved in corruption. It's a big challenge as we have to remove most of the personnel in the Libyan institutions. Nonetheless, there are also competent and reliable people who should stay.

What's the current situation of telecommunications in Libya?

We've already restored the internet in many parts of Libya. We mustn't forget that Facebook has played a massive role behind our revolution. The service has been running for months in the eastern part of Libya and it was restored in Tripoli just a day after the city was liberated. Mobile communications are also back in many parts of the country doubtless making people's lives much easier now. Fixed lines are also restored.

Regarding the sea ports, those in Benghazi, Derna, Tobruk - all of them in eastern Libya - and Misrata in central Libya - are operative and you can also see some vessels here, at Tripoli's harbour. We're bringing fuel from outside the country through the port of Zawiya in western Libya as well as many other supplies from the eastern part of the country. All this will help stabilize our country after six months of war.

Nevertheless, one of our biggest challenges is the air embargo. As you already know, it was set up last March to protect the life of civilians but now it's causing a lot of trouble because people cannot travel freely in and out of Libya. We have already resumed operations from the airports in the Eastern part of the country like in Benghazi, and also Misrata and a few days ago we landed at Tripoli's Mitiga airport.

How do you operate flights under the embargo?

We need clearance from NATO on a flight-by-flight basis to transport both civilians or humanitarian cargo. I was discussing with the UN a few days ago lifting the air embargo once we've toppled completely Gadhafi's regime. Both Libyan Airways and Afriqiyah's (state-run air companies) assets are frozen and we need to unblock them to go back to normal in this aspect once the war is over.

There were several phone companies in the country run by the previous government. Is the NTC planning to nationalize them?

There were nine companies running mobile, internet and land telephone communications, all of which were owned by Gadhafi's son, Mohammed. Now we are in the process of handing those companies to the Libyan people. We have appointed an executive team for each of them on a temporary basis. The same process is being conducted in the maritime and air sectors.

My personal view is that they should be partly owned by both the state and the private sector but you have to bear in mind that we're still an interim government so that's what we'll actually do if we manage to remain in power. I understand that PPP (Public Private Partnership) would be beneficial for the Libyan people.

Which foreign companies, if any, are already involved in the reconstruction process in Libya?

Just to name a few, there is Alcatel from France, Ericsson from Sweden as well as a number of Chinese companies who are helping us. In the aviation sector Airbus and Boeing are our main allies. Gadhafi succeeded to damage three aircraft during the liberation of Tripoli, yet another crime against the Libyan people. As for the land transport, we're reviewing all those contracts signed by Gadhafi's regime and we will respect all those which are transparent and trustful.

This is a very sensitive question and I don't want to comment any further. I can only say that it can be done, as in many other countries in the world. Personally I'm against spying on people so one of the first things I'd like to do is to ban the law that allows the government to track people's communications. Egypt has already released new regulation that prevents the government from doing so and I hope we follow suit in Libya.

When will you consider that the war has finished?

I'm afraid it's mandatory to capture Gadhafi to officially announce the fall of his regime.

Respected diplomat Wolfgang Ischinger talks about Germany's decision to abstain from the UN Libyan vote and why despite the success of the NATO intervention, we won't likely see a spate of similar missions soon. (29.08.2011)