NATO has played and continues to play a decisive role in the Libyan rebels' campaign to topple Moammar Gadhafi and his regime, says retired German General Egon Ramms. 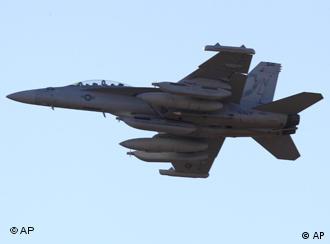 Some charge NATO has gone beyond its UN mandate

NATO is continuing its air campaign in Libya and turning its attention to Moammar Gadhafi's hometown of Sirte. The alliance is also providing Libyan rebels intelligence so they can get a clearer picture about what is happening around the capital Tripoli, according to retired German General Egon Ramms.

Bettina Klein of Deutschlandfunk radio spoke to Ramms about NATO's role in Libya and if it has stayed within the bounds of its UN-approved mandate.

Bettina Klein: In your estimation, what role have NATO countries played in the recent developments in Libya?

Egon Ramms: In considering NATO's mission that began in March, I think the alliance has played a decisive role in helping the rebels push forward. If you remember, Gadhafi almost succeeded in pushing the rebels back to Benghazi at one point. I think that without NATO support, the rebels would not have been able to make it to Tripoli. NATO is still engaged in giving the rebels intelligence and, I'd say, clarifying the situation on the ground in Tripoli. You see now in the reporting on Gadhafi, his sons and the events in Tripoli that we are still faced with a very fluid situation.

Does that mean you wouldn't want to make any predictions about how things are going to play out over the next days and weeks, or how long it will take to capture Gadhafi?

I don't know if Gadhafi is even in Libya anymore. He could be sending his telephone messages through Libyan broadcasting from anywhere, so that doesn't provide any clues. I suspect, though, that he is still in the country because he's always said that he would remain. It could be a matter or days, but also a matter of weeks, until he is actually captured.

British Defense Minister Liam Fox made statements, perhaps inadvertently, about the participation of NATO troops or troops from NATO member states in the hunt for Gadhafi. Would that be covered by NATO's mandate?

No! That would clearly not be covered by the NATO mandate. Mandate 1973 from March talks about air support and the protection of the civil population - it does not allow for anything else. That means any additional actions or participation would have to be approved in a new mandate in the UN Security Council. I don't see that happening right now. And the question of armed forces in Libya when Gadhafi is captured and the fighting is over is a difficult one, because you have a lot of different interest groups involved in the equation.

That means it look like troops there are acting without a mandate?

Right now, I think that everything that is happening is within the UN-approved mandate. There has been a discussion about whether NATO should be allowed, or actually has been allowed to attack with bombs. I see this, in an expanded interpretation, as being a part of protecting the civil population. I think we would have seen more losses if the rebels had not been able to progress quickly, which was possible through NATO's support.

There have been unconfirmed reports, or perhaps better said, speculation, that there are special forces on the ground in Libya, on which the success of the rebels depended. NATO has said that as far as its forces are concerned, that is not the case. However, it has also said it can't comment on individual states' actions.

NATO is a number of nations that are participating as NATO members. Every nation, even if it's a NATO country, is still a sovereign state. I would like to vouch for NATO in saying that it is not carrying out actions that are beyond its mandate, but I can't say anything about individual member states.

But I could well imagine that, for example, countries like Great Britain, France and the US would go to great pains to stay faithful to the mandate. The countries don't want to get themselves in trouble on the world stage by violating a UN mandate. They work with the UN in many contexts and in other situations, such as Afghanistan, also under a UN mandate.

But you would agree that there are gray areas in these types of missions?

There is also a lot of speculation in these kinds of cases, from the political side as well as from the journalistic side. Often this speculation comes out of thin air, and sometimes there are advisors or similar people behind it who actually support the armed forces and, I'd say, are using this kind of strategy to try to prevent large amounts of bloodshed. But I'll say it again, I can't rule anything out.

What do you make of the German government's position? It's trying to draw attention to its own contribution by saying that its abstention on the Libya vote in the UN Security Council was right.

I don't see it that way. The abstention in the Security Council was not right because it simply sent out the wrong message to NATO's underlying principle of solidarity. The decision made at the time - where Germany sided with Russia, China, Brazil and India - sent the wrong message to the other NATO members in the Security Council as well as NATO member states in general. In retrospect, it has to be said that when you consider the critical situation in Benghazi in the latter half of March, the rebels' progress was actually made possible by the British and the French who intervened very quickly.

The NATO mission is basically meant to protect the civilian population. Earlier this year, we had a debate about what protecting the civil population actually means - possibly that it means providing the rebels with weapons and intelligence to support them in their fight against Gadhafi. So we're in a legal grey zone. Is it just a kind of interpretation that hasn't been thought through or discussed to the end?

It's certainly true that it hasn't been discussed to the end. And I'd like to point out that due to different national laws in the individual NATO member states, different interpretations of the mandate are possible. Some countries such as France and Britain interpret it more offensively and some like the United States a bit more reservedly. And then there are states, for example like Poland and Germany, who interpret the mandate from a much more defense-oriented standpoint.