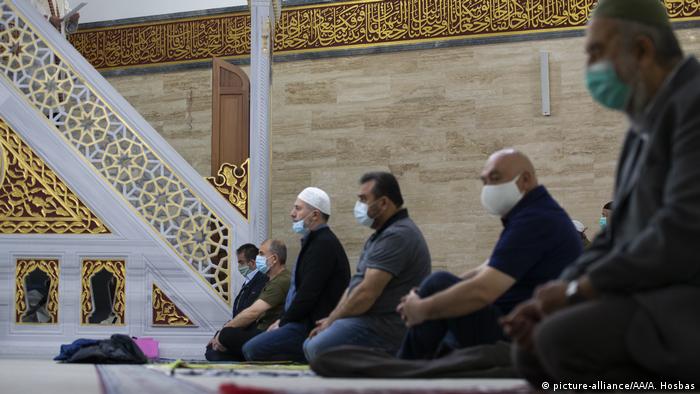 The latest spate of terror attacks in France and Austria will not hamper the cooperation between the government and Germany's Muslim community, Interior Minister Horst Seehofer said on Tuesday.

"We won't let terrorism and extremism derail us," Seehofer said at the start of this year's German Islam Conference.

Seehofer praised an Islamic theology program for German-speaking imams in the city of Osnabrück as a significant contribution towards preventing radicalization.

The Interior Ministry-funded project is "money well-spent for societal cohesion in our country," Seehofer said.

The focus of this year's conference, which is taking place digitally due to the coronavirus pandemic, is on imam training in Germany.

The atmosphere during the talks this year is especially charged following a series of recent deadly attacks in Paris, Nice and Vienna that authorities say were carried out by radical Islamists.

Conference participants will debate and offer up solutions on a range of topics, including Islamic religion classes in schools and the training that Islamic preachers receive — as well as what language should be used in German mosques.

Since 2006, the annual meeting has sought to encourage dialogue between the German government and representatives from the country's Muslim community.

With many imams receiving their religious training abroad, very often in Turkey with the contentious state-run Diyanet organization, the German government hopes to boost programs for Islamic religious leaders to be taught in Germany.

Bülent Ucar, the director of the Institute for Islamic Theology at the University of Osnabrück, said that training would not be enough — the program's graduates need to get positions in mosques as well.

In an interview with the German Protestant news agency epd, Ucar urged the German government to provide state support to local mosques to help them become more financially independent.

The state could fund integration and German language programs at mosques in a similar way it supports social programs in other religious communities.

"Then the congregation could use the donations from its members to pay for their imams," Ucar said.

German-speaking imams can 'immunize against extremism'

For the head of the Council of Muslims in Germany, an expansion of programs to train German-speaking imams is long overdue.

He said that many extremists had turned their backs on mosques and other Islamic institutions, making them harder to reach.

But Muslim communities could help with religious counseling and prevention — particularly for the families of extremists.

Providing more support and care for families could help "win back" the people who are closest to those who have been radicalized, he argued.

Outrage in Muslim community over attacks

Looking to the recent attacks, Mazyek also claimed that the majority of Muslims in Germany were moderate and that their outrage over the murders was "light years greater than over any caricatures."

France has come under fire from the leaders of several Muslim-majority countries over President Emmanuel Macron defending caricatures of the Prophet Muhammed. Last month, a teacher near Paris was decapitated after showing the caricatures to students as part of a free speech lesson. While the caricatures have not courted particular criticism in Europe, elsewhere in the world, not least in parts of Pakistan, protests criticizing French President Emmanuel Macron's reaction have been widespread.

Last Monday, a gunman killed four people and wounded dozens more in the Austrian capital of Vienna. Officials said the man had been a supporter of the militant Islamic State (IS) group.