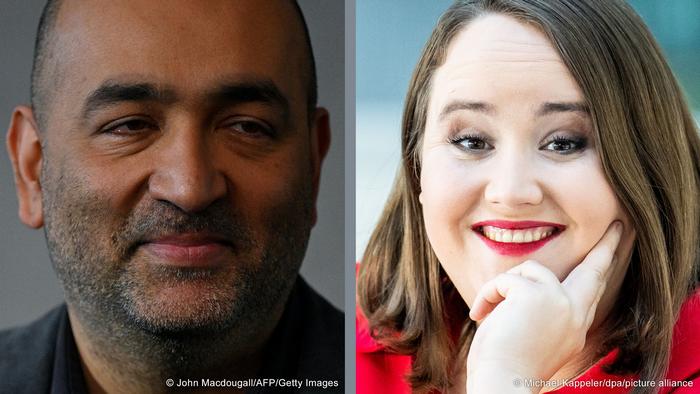 Nouripour and Lang represent different wings of the Green Party

Who are Lang and Nouripour?

Lang, a 28-year-old who previously served as a party spokeswoman on women's issues, is seen as part of the of the party's left wing, while 46-year-old Nouripour is viewed as more moderate.

Lang tweeted it is an "honor" to lead the party along with Nouripour.

She and Nouripour will take the helm of Germany's most prominent environmentalist party after it received its highest-ever result in September's general election.

Lang is one of the youngest party leaders in the Greens' history. Nouripour, who was born in Iran, is a foreign affairs expert whose career in the Bundestag spans more than a decade.

On Saturday, Lang told DW the Greens must widen its voter base and "get more people to engage with us and to trust in us, especially in rural areas."

Nourpour, meanwhile, told DW the Greens must "stand together" with its coalition partners on foreign policy amid tensions with Russia.

The duo will replace Annalena Baerbock and Robert Habeck, who are serving in Germany's coalition government under Chancellor Olaf Scholz. Baerbock is currently foreign minister, while Habeck serves as vice chancellor and minister for economic affairs and climate action.

How do Lang, Nouripour view the Greens' role in government?

Both Lang and Nouripour reflected on the Greens' role in the government during their speeches on Saturday. The Greens must work and cooperate with their coalition partners the Social Democratic Party and the neoliberal Free Democratic Party to deliver on campaign promises, such as a massive decrease in carbon emissions.

"Governing isn't a punishment, it's a huge chance," Lang said.

Nouripour said the Greens need to be "smart and self-confident" as the party tackles the challenges of governing, while calling for "solidarity" with Baerbock and Habeck.

The Greens last served in the government in 2005 under Chancellor Gerhard Schröder.