Germany's Gabriel warns Turkey against 'blackmail' over Incirlik base

Germany's foreign minister has said Berlin may pull its troops out of a base in Turkey if lawmakers aren't allowed to visit. The latest spat comes as two Turkish generals reportedly applied for asylum in Frankfurt. 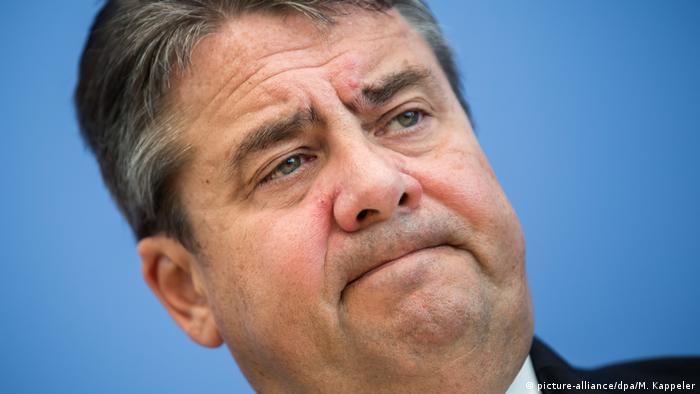 NATO says it's not getting involved in a German-Turkish dispute over Incirlik access but the alliance may still be impacted. Analysts say tension between Ankara and Berlin could have an ill effect on NATO solidarity. (16.05.2017)

Germany likely to pull troops out of Incirlik air base

The Berlin government is mulling moving its troops out of Turkey's Incirlik air base after a second snub by Ankara. A German political delegation was denied approval to visit Bundeswehr soldiers at the military facility. (15.05.2017)

The arrest of a German national comes amid heightened tensions between Berlin and Ankara. Mesale Tolu has been in Turkish custody since the end of April, but German officials were not informed about the case. (12.05.2017)

If "the German parliament is to be blackmailed, then the limit of tolerance has been reached," Gabriel told German newspaper the Neue Osnabrücker Zeitung.

"I can only hope that the Turkish government will change its mind in the coming days," he said. "Otherwise, the German Bundestag will certainly not leave soldiers in Turkey."

Gabriel noted that if cooperative work is no longer possible out of Incirlik, including members of parliament visiting soldiers on the base, "then we have to consider alternatives."

On Monday, Turkish authorities blocked a delegation of German lawmakers from accessing the southern Turkish air base. The parliamentarians were attempting to visit the 250 Bundeswehr soldiers stationed there as part of the US-led coalition fighting the militant "Islamic State" (IS) group.

German news magazine Der Spiegel reported that the Defense Ministry was already scoping alternatives to the Incirlik base in Jordan, Kuwait and Cyprus.

Jordan is reportedly the top choice for an alternative base, with the magazine reporting that Defense Minister Ursula von der Leyen will personally inspect the site in Jordan this weekend.

Although Berlin is already hunting for an alternate base, Major Rayk Hähnlein, a defense expert at the German Foundation for International and Security Affairs (SWP), told DW that such a move would also have strategic downsides.

"In Incirlik, we use the rescue chain on site, which was provided by the US. The States provide support with ramp space, storage space, hangers and also fuel," Hähnlein said.

He added that German troops also collaborate with forces operating out of Incirlik with transporting materials and personnel.

"These are all things that wouldn't be available at a new location." The latest move to block members of the Bundestag, the lower house of German parliament, from visiting the air base was ostensibly a response to the German government's decision last week to grant asylum to Turkish military personnel.

The German newspaper Bild reported late on Tuesday night that two more high-ranking members of Turkey's military applied for asylum at the international airport in Frankfurt.

According to Bild, the two men were Turkish generals who were involved in last July's failed military coup.

On Tuesday, Turkish Prime Minister Binali Yildirim told his party members that Berlin's decision to accept the asylum applications is "a significant development in the regression of our relations again."

Yildirim said that Germany had to choose between groups Turkey deems terror organizations or strengthening ties with Ankara.

Relations between Germany and Turkey have grown increasingly strained over the last few months and took a nosedive during Turkey's referendum campaign on expanding President Recep Tayyip Erdogan's powers. Turkish ministers who were campaigning for the "yes" vote were later barred from holding rallies in Germany.

Last year, Ankara blocked German parliamentarians from visiting the Incirlik airbase after the Bundestag passed a resolution declaring the 1915 massacre of Armenians by Ottoman forces as a "genocide."