Free Democrats leader Christian Lindner has offered to prop up a minority government led by Angela Merkel's Christian Democrats. But the former kingmaker also predicted that such an arrangement wouldn't last very long. 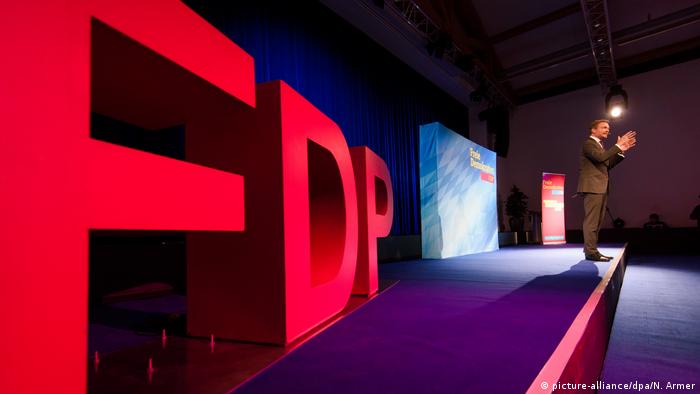 Christian Lindner, the leader of the neoliberal Free Democrats (FDP), who last year pulled his party out of coalition talks with Angela Merkel, has now sent what seemed at first like a conciliatory gesture to the chancellor.

Speaking to the magazine Focus, Lindner said the FDP might support a minority government led by Merkel's conservative Christian Democratic Union (CDU), but then went on to maintain his air of dissatisfaction with the chancellor by declaring that it didn't matter anyway. "I'm sure that there won't be much to decide on, because a minority government would only last a few months," he said.

"We are a constructive and responsible party," Lindner told the magazine, before adding that there were many areas where he could imagine propping up the conservatives in Germany's parliament, the Bundestag: "On the dismantling of bureaucracy, the unburdening of citizens (the standard German euphemism for tax cuts), the acceleration of digitalization, a modern immigration law, or education reforms."

He added that his party's 80 Bundestag members would decide "from matter to matter" how to vote. The FDP previously said it would only join a coalition with the CDU if Merkel stepped down.

Read more: The AfD has a new hero — Christian Lindner 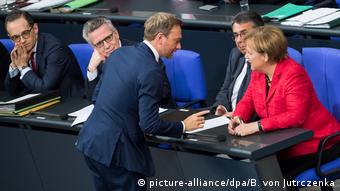 After four years cast out from the political landscape, Lindner led the FDP back into parliament with 10.7 percent of the vote in last September's national election. This turned Lindner into a kingmaker: he could have entered into a "Jamaica" coalition with Merkel's CDU, its Bavarian sister party, the Christian Social Union (CSU), and a newly centrist-leaning Green party.

But those talks collapsed in November, leaving the CDU to turn desperately back to the center-left Social Democrats (SPD) to try and form a stable majority government. It is now up to the SPD's membership to decide whether to accept the resulting coalition contract, agreed in early February.

If those 460,000 Social Democrats vote no, Merkel could be left trying to hold together a minority government, which — as a new survey showed — 55 percent of Germans do not favor. Some 75 percent of CDU supporters reject the idea.

The FDP and Lindner, meanwhile, have suffered a blow to their reputations as a result of pulling out of the talks. The other two parties in the negotiations - the CDU/CSU and the Greens - were quick to round on the FDP as the reason the talks had collapsed.

Josef Janning, German politics expert at the European Council on Foreign Relations (ECFR), said the new statement showed mainly that Lindner was "back from vacation," and was now ready to "exploit the situation." 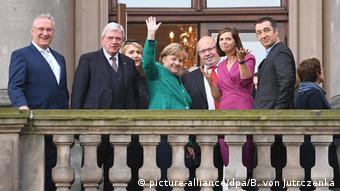 The problem for Lindner is that Germany's other smaller parties — the Greens, the socialist Left party, and the far-right Alternative for Germany (AfD) — have all benefited from the new turmoil within the CDU and SPD, while the FDP has been left in limbo.

"That has to do with the critical attitude of the public to parties perceived as not wanting to provide for a stable government," said Janning. "So Lindner is trying to appear responsible, but at the same time he wants to carry the divisions into the CDU."

The rifts in Merkel's party are deep. Many members are already planning for a Merkel fall following a short-lived minority government, which would precipitate the advent of a younger, more right-wing candidate, who the FDP would be much more sympathetic to.

The FDP has historically been a natural partner to the CDU — providing the business-friendly policies to complement the CDU's traditionalism.

But more recently, with the threat of an insurgent AfD emerging, the FDP has found a more nationalist, anti-EU bent. "The FDP was once very engaged in the liberal single market project — that was the kind of Europe they wanted," said Janning. "A more competitive environment with less state intervention. But this period is passed — now people fear the state intervention from the EU. The calculation of the Lindner liberals is that if people tend to focus more on the nation, then the FDP should try to win a good part of that vote."

Government wanted – How weak is Merkel?

Cem Özdemir led the party as co-chair for more than nine years and was the top candidate in the 2017 election. Delegates at the party convention in Hanover are set to elect fresh faces on Saturday. (26.01.2018)