Ursula von der Leyen had to scrap her last visit due to political deadlock in Berlin. Germany is reportedly preparing to roll back its role in the fight against "Islamic State." 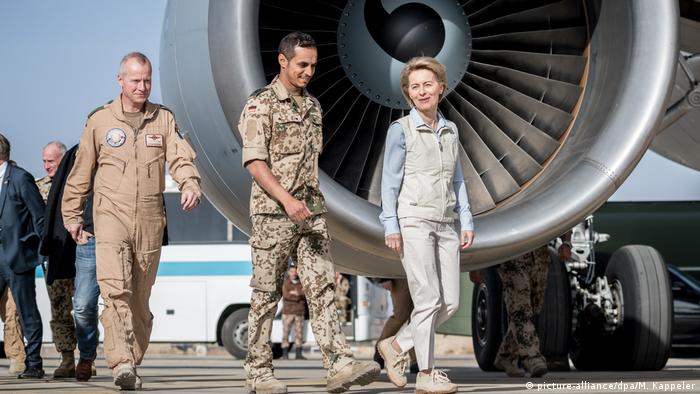 German Defense Minister Ursula von der Leyen was in Jordan on Saturday with a group of German parliamentarians to visit Bundeswehr soldiers who are part of the US-led coalition against the "Islamic State" terror group.

Von der Leyen had to nix a planned trip in November due to an impasse in forming a government at home.

"It's important to me that Germany give assurances that we are reliable," she said.

The defense chief visited the troops at the al-Azraq base, where they've been stationed since being moved from Turkey last year. The move came amid escalating tensions between Berlin and Ankara that resulted in German lawmakers being barred from visiting the Incirlik Air Base.

Despite IS having lost ground in both Iraq and Syria, von der Leyen said the terror group would continue to pose a threat.

"We are going to have to keep fighting IS," she said. "It is clear that the international community's task will continue to be to fight Islamist terror and to stabilize the region."

Germany has been without a government since federal elections on September 24 left the Christian Democrats (CDU), of which von der Leyen is a member, struggling to form a coalition government.

However, over the past week the CDU and Social Democrats moved closer to forming a so-called "grand coalition" of the country's two biggest parties. One of the key elements of their preliminary agreement states that the anti-IS mandate to support and protect our allies, especially France, can be significantly reduced" due to IS's massive loss in territory over the past few months.

While in Jordan, von der Leyen promised the new government would provide troops with better equipment and training.

Four German reconnaissance planes and a refueling aircraft fly missions from Azraq, with an average of 280 German troops stationed there.

The German military has been recruiting more and more minors, the Defense Ministry has admitted. Critics have accused the government of hypocrisy over opposition to the use of child soldiers. (11.01.2018)