Senior German politicians and industrialists have warned that integrating the huge numbers of refugees expected to arrive in coming years will be a massive challenge - but the country will rise to meet it. 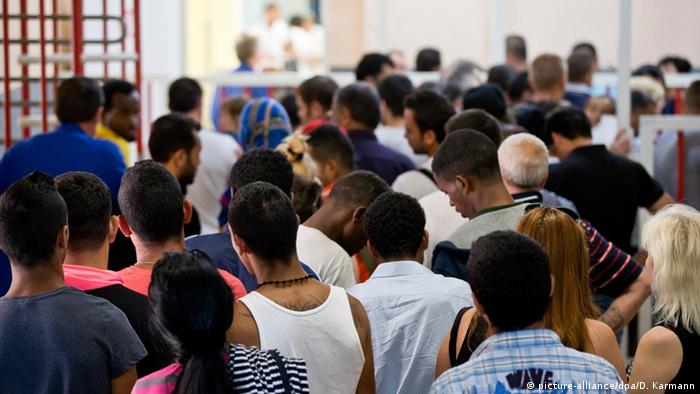 In Berlin on Monday and Tuesday, several of Germany's most senior politicians and corporate leaders spoke candidly - but for the most part optimistically - about the magnitude of the challenge presented by the enormous wave of refugees and migrants headed into the country.

"I believe we'd be able to handle half a million refugees a year for several years," said Sigmar Gabriel - Germany's Vice Chancellor, leader of the Social Democratic Party (SPD) and Minister of Economy and Energy - on Monday evening in a TV interview with ZDF, a German public broadcaster.

The Premier of the state of North Rhine-Westfalia, Hannelore Kraft (SPD), warned official estimates on the number of refugees expected to arrive in the country during 2015 are likely to be revised upward. 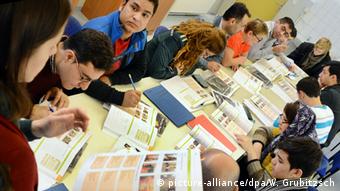 Immigrants learning German at a course in Leipzig. Overcoming the language barrier is a key to success

In May, the Federal Office for Migration and Refugees (BAMF) had projected a total of 450,000 refugee applications for the year. The number was adjusted to 800,000 in mid-August, as it became clear the dimensions of the flood of desperate migrants was far surpassing previous estimates.

The numbers grow and grow

But now Premier Kraft has said that "we're all well aware that the number won't stop at 800,000," adding that given the high number of new arrivals, previously agreed federal financial aid packages to states and local communities to help them cope with the influx were clearly inadequate.

Federal Minister of Economic Cooperation and Development Gerd Müller made a similar point on Monday in an interview with the Magdeburger Volksstimme newspaper, saying Germany must get ready for the family reunifications that will follow on the heels of the first flood of refugees.

Under German law, people who have officially been granted refugee status have a right to bring their closest family members into the country. Germany must prepare for hundreds of thousands of family members to be brought in through this channel in coming years, Müller said. 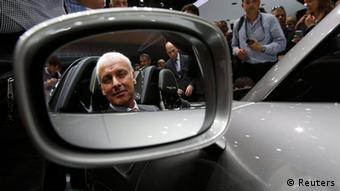 A year ago, Germany's estimated population was at 81 million, and a gradual decline of the population was projected for the coming decades, with Germany having the world's lowest birthrate and a graying population. Those projections too will have to be rethought.

Interior Minister calls for a public discussion on refugees

Speaking in Parliament on Tuesday, Germany's influential Minister of the Interior Thomas de Maizière, who is a close aide to Chancellor Angela Merkel and a member of her centre-right Christian Democratic Union party (CDU), said that the country needed an open and frank debate about the consequences and challenges of the enormous stream of refugees.

"Please, let's not deny that great challenges will follow on our initial friendly welcome of the newcomers, challenges that will have to be met in everyday life" in the days and years to come, de Maizière said.

Many Germans were asking where the limits to the country's ability to absorb refugees might be, or how the country's "face" - its ethnic and cultural makeup - might change, and "those are all legitimate questions." They will have to be debated, "and arguments and disagreements will naturally be part of the debate." 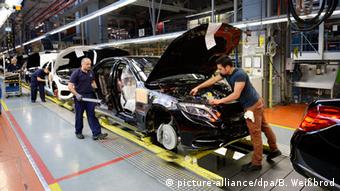 Daimler-Benz, makers of Mercedes cars and trucks, looks forward to integrating some refugees into its workforce

But, he added, that debate must be carried out within the framework of common understanding: The dignity of other people must be fundamentally respected.

"Those who come here have a right to be treated with decency," he said.

Respect is a two-way street

At the same time, the country had a right to expect decent behavior from refugees arriving in Germany: "Those who come into our land have equally to respect other people and respect our laws," de Maizière said.

That must include respecting the decisions of immigration authorities in those cases where applications for refugee status are turned down, and rejected applicants are instructed to leave the country. Such instructions, until now, have too often been simply ignored.

The Interior Minister added that in his view, in the long term, Germany would not be able to sustain an annual influx on the order of 800,000 refugees.

Industry is ready to help

An optimistic and welcoming tone was struck this week by a number of senior German industry leaders, who emphasized that the country's major corporations would take active steps to welcome refugees into the work-force. 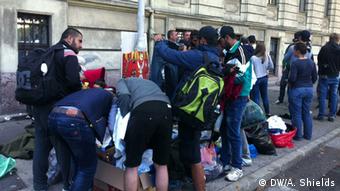 "We cannot pretend as though it doesn't have anything to do with us when drowned children wash up on the shores of the Mediterranean and desperate people roam through Europe looking for a peaceful future," said Klaus Engel, CEO of the Essen-based chemicals corporation Evonik, in an interview with Handelsblatt business newspaper on Monday.

Porsche's chief executive, Matthias Müller, was asked by the Süddeutsche Zeitung on Saturday what German industry could do in practical terms to help the refugees. His succinct reply: "With new jobs!"

Müller also called for industry leaders to "take a clear stand against xenophobia and extremism," an important message in the context of the wave of arson attacks against refugee domiciles in recent weeks. The plight of refugees has stimulated a great wave of welcoming and volunteerism in Germany - but it has also provoked acts of rejection by neonazis and racists.

Corporate leaders want quick integration of refugees into the workforce

In an interview with Handelsblatt, Frank Appel, the chairman of the board of Deutsche Post, the world's largest logistics and mail service - which emerged from the privatization of the national mail service in 1995 - called for rule changes that would enable refugees to be allowed to take jobs very quickly after their arrival, so that corporations could make good use of their potential. He said that hundreds of thousands of unfilled jobs were on offer in the country.

Dieter Zetsche, CEO of Daimler-Benz, the famous automobile maker, said his company would take steps to recruit new employees from amongst the incoming refugees.

"I can imagine that we could go into the refugee reception centers and provide information on the possibilities and requirements involved in getting work in Germany, or specifically at Daimler," Zetsche told the newspaper Bild on Sunday. "Most of the refugees are young, well trained and highly motivated. That's exactly the sort of person we're looking for."

The head of Germany's Chamber of Commerce and Industry (DIHK) Eric Schweitzer called for increased language instruction programs for refugee applicants. An ability to speak, read and write German is "a prerequisite for education, training and employment," he said.

What happens if unemployment rises?

In August, 2.8 million people were registered as unemployed with Germany's federal jobs agency. That was the lowest number of registered unemployed people during any August since 1991.

With exports and imports both at a historic high and Germany's economy purring along, and industry welcoming the influx of young potential workers, most people don't seem very worried about the economic impact of incoming refugees.

But some Germans have expressed concern about what might happen if an economic downturn were to occur. In an environment of rising unemployment, social acceptance of high numbers of incoming refugees could suffer - particularly among out-of-work native Germans.

It will be very helpful if the country's economic engines continue to purr for years to come.