Foreign Minister Annalena Baerbock said urgent action is needed to combat hunger amid rising food prices and the devastating impact of climate change in Niger and other areas of the troubled Sahel region. 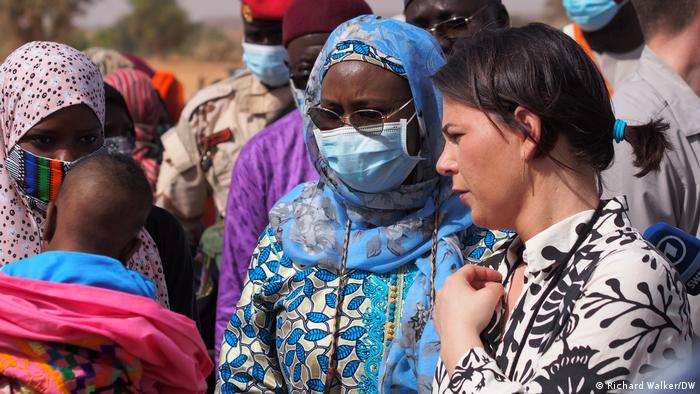 Germany's Foreign Minister Annalena Baerbock continued her West Africa tour on Thursday with a visit to Niamey, the capital of Niger.

She also highlighted the growing threat of hunger that has been exacerbated by Russia's invasion of Ukraine — and is contributing heavily to a spike in food prices.

During a visit to the Ouallam refugee camp, Baerbock urged for the international community as a whole to step up food aid efforts.

"We see and hear you and have a responsibility to somehow bring this hurricane of crises under control," she said.

"As industrialized nations, we have to significantly increase international help in order to avoid a hunger crisis here," Germany's top diplomat added.

She also observed an agricultural irrigation project meant to tackle climate change effects in the country.

Baerbock met with Foreign Minister Hassoumi Massoudou to discuss the country's security situation and spoke about "whether there is additional need in Niger," in the context of sending more German troops.

Massoudou said that Niger wanted "partners to be more involved" in training Niger's military "and in joint missions."

Baerbock said that any troop increase would have to be done in tandem with EU partners and would need the backing of the Bundestag.

Massoudou said Niger was  "satisfied with the military cooperation with Germany."

Niger, like much of the Sahel, is affected by a combination of conflict, climate change and food insecurity. It faces Boko Haram terrorists on its southern flank and Al Qaeda terrorists on its western border with Mali.

The trip marks the first time Baerbock has traveled to the troubled Sahel region as foreign minister and comes at a time of growing hostility towards France, a former colonial power with heavy economic interests there.

The "climate crisis, for a mother, means that she doesn't know what she will give her children to eat in the evening, that a father worries about his son joining extremist henchmen," Baerbock said in a tweet late Wednesday, highlighting threats that have fueled hunger, conflict and displacement in Niger.

The Green Party politician's Niger trip follows a two-day stop in neighboring Mali where she urged the military junta to hold democratic elections and cut ties with Russian mercenaries.

Mali's transitional military leaders took power in a 2020 coup and have increasingly isolated the troubled country from West African and European allies, turning instead to Russia to help combat rising jihadi threats. 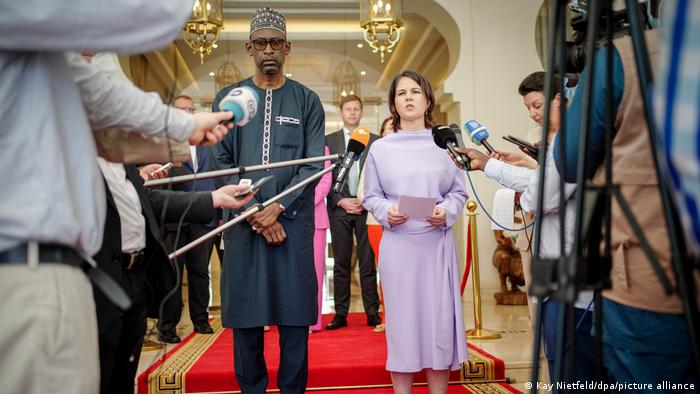 Mali is reportedly working with the Russian mercenary group Wagner. The group is suspected of close ties with the Kremlin.

In the village of Moura, around 300 civilians were killed in raids by Malian soldiers that were assisted by suspected Russians, according to the NGO Human Rights Watch.

Three German NGO workers arrested in one such raid were freed Wednesday.

Germany will decide in May whether to pull out 1,400 troops deployed in Mali under EU and UN mandates. The EU scrapped military training missions there this week while France withdrew its more than 2400 fighters in February.