Explosions hit a UN camp and a bus in Mali while neighboring Niger saw an attack on a military base. The base is used by the G5 Joint Force of Sahel countries to combat militants in the region. 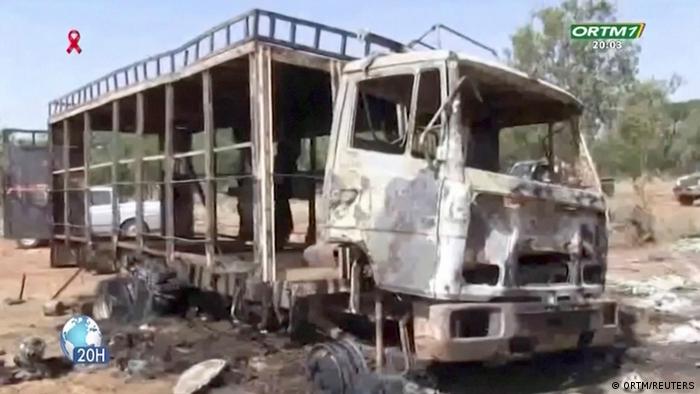 Insecurty is a fixture of life in the Sahel, and images like this burnt bus following an armed attack Saturday are part of life in the West African nation

Explosions rocked a truck and a UN camp in Mali on Sunday while another attack targeted an international military base in neighboring Niger.

West African nations have struggled to contain jihadist insurgencies in the region, with some groups pledging fealty to terrorist groups such as al-Qaida or the so-called Islamic State (IS).

What happened Sunday in Niger and Mali?

The attack in Niger was aimed at a base that countries in the region use to fight insurgencies. Officials said 79 attackers and 29 soldiers were killed.

An army spokesman said a large group consisting of hundreds had approached the Fianto base in the Tillaberi region on motorcycles to carry out the attack.

The Fianto base is used by the G5 Joint Force, which consists of the five Sahel countries of Mauritania, Niger, Chad, Mali and Burkina Faso. It was created in 2017 to establish order on their common border regions.

The attack in Mali hit a truck carrying dozens, leaving at least 31 people dead. In the northern city of Gao in Mali, two explosions rocked a UN camp early on Sunday. The AFP news agency reported that the blasts caused damage but no deaths.

The blasts shook the barracks of the UN mission in Mali. Those who were inside were forced to take refuge in nearby shelters for two hours.

What is the overall security situation in Niger and Mali?

Both Niger and Mali are struggling to contain an Islamist insurgency that started in 2012 in northern Mali.

The federal government in both West African nations has little control outside cities in the vast deserts that comprise the countryside. Additionally, both countries are desperately poor, ranking at the very bottom and near the bottom of the UN's Development Index.

The overall weak governance in the region has been exploited by jihadist groups as well as criminal networks like human traffickers. The violence had killed and displaced thousands in both the military and among the civilian population.

The French army and the UN both have thousands of troops present in Mali, though France has said it is reducing its military presence there. Germany currently has 1,300 troops stationed in the country.

The latest violence in Mali comes after an attack Friday carried out by suspected jihadists near the central town Bandiagara.