The chancellor's spokesman has announced plans for Angela Merkel to meet with the relatives of those killed in last year's Christmas market attack. In a critical letter, the relatives accused her of "political inaction." 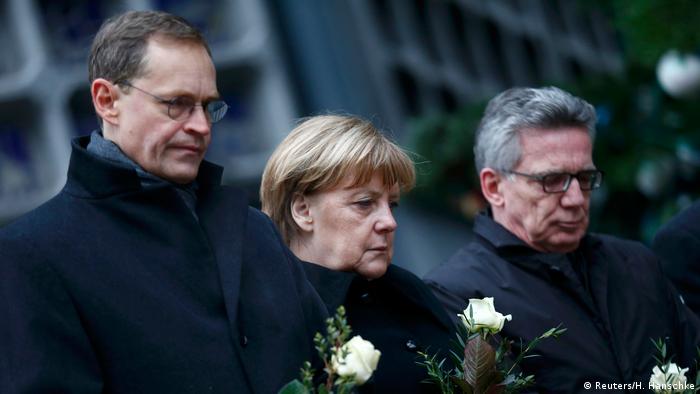 German Chancellor Angela Merkel will meet with the families of the 12 people killed in a terrorist attack that targeted a Christmas market in Berlin last year, government spokesman Steffen Seibert said on Monday.

The announcement comes after the relatives of those killed wrote a letter published in the Hamburg-based Der Spiegel news magazine that accused her of "political inaction" and failing to reach out in the aftermath.

"Almost a year after the attack, we note that you have not shared your condolences with us either in person or in writing. In our opinion, this means that you are not doing justice to your office," said the letter.

"It is a matter of respect and decency and it should be self-evident that you as head of the government … acknowledge to our families the loss of a relative because of a terrorist act."

'Lessons can be learned'

Seibert said it was a "moving, critical letter" that was read in Merkel's office "with the greatest respect."

However, he insisted that plans to meet with the relatives of the attack's victims had already been made before the letter was published. "The letter shows how useful and urgent this meeting is," he said.

In March, then-President Joachim Gauck met with the relatives of the 12 people in agreement with the chancellor's office.

At least 1.6 million euros ($1.9 million) in compensation has been given to the families of the victims and people wounded in the attack, according to justice ministry figures.

In the letter, the relatives of the victims said Germany lacked "basic professionalism in its approach to terrorism."

German authorities have come under pressure for failing to apprehend 24-year-old Tunisian national Anis Amri, the failed asylum seeker suspected of driving the truck into the Christmas market crowd, after mingling in extremist circles and dealing drugs.

"At a time when the threat posed by dangerous Islamists has greatly increased, you have failed to push ahead with expanding resources and reforming the confused official structures for fighting these dangers," the letter said.

Germany has been on high alert since the attack, with the country's intelligence agencies warning that returning foreign fighters may pose a significant threat to security in the country and elsewhere in Europe.