The German chancellor was seen slightly shaking while greeting Finland's prime minister in Berlin. It's the third time in recent weeks that this has been noticed during public appearances. 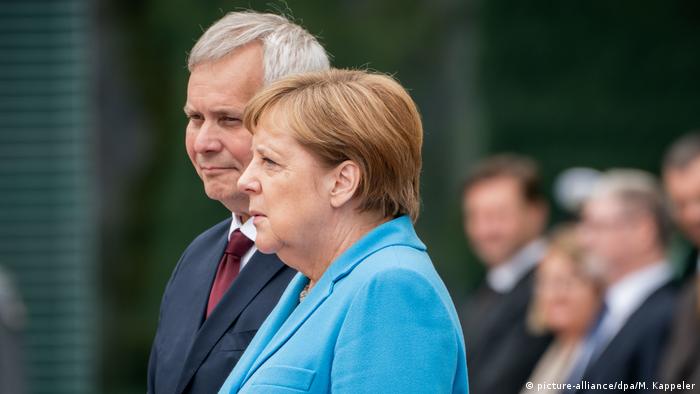 German Chancellor Angela Merkel appeared to be shaking in Berlin on Wednesday while receiving Finnish Prime Minister Antti Rinne, according to reporters and witnesses.

Video of the event shows her slightly shaking for an extended period of time while both countries' national anthems were playing.

At a press conference following talks with Finland's prime minister, Merkel told reporters that she was doing fine after the incident.

"I am doing well," Merkel said with a smile. "You don't have to worry about me."

She added that she is still in a "processing phase" after her first shaking spell in mid-June during a visit from Ukraine's president. "That is apparently not yet completely finished, but progress has been made," she added.

It was the third time in recent weeks that Merkel was seen visibly shaking at a public event, although Wednesday's incident was not as severe as the prior cases.

On June 18, she visibly shook while receiving Ukrainian President Volodymyr Zelenskiy with military honors in Berlin. At the time, she said that she'd felt better after drinking three glasses of water.

A week later on June 27, Merkel also shook during a ceremony with German President Frank-Walter Steinmeier, just hours before flying off to the G20 summit in Japan.

Her office has dismissed concerns about the chancellor's health, saying that the prior instances were due to the heat and dehydration. Temperatures on Wednesday in Berlin, however, were cooler.

Merkel, who will turn 65 next Wednesday, is known for her work ethic and has a reputation for outlasting other world leaders at lengthy summits. She is due to step down from her post when her term ends in 2021.

German Green party leader Annalena Baerbock has tweeted her apologies after suggesting that the chancellor's trembling may have been caused by climate disruption. Germany is currently in the middle of a heat wave. (29.06.2019)