Sandy beaches, charming lighthouses and a pleasant breeze characterize the northern state of Schleswig-Holstein. It's located between the North Sea and the Baltic Sea. 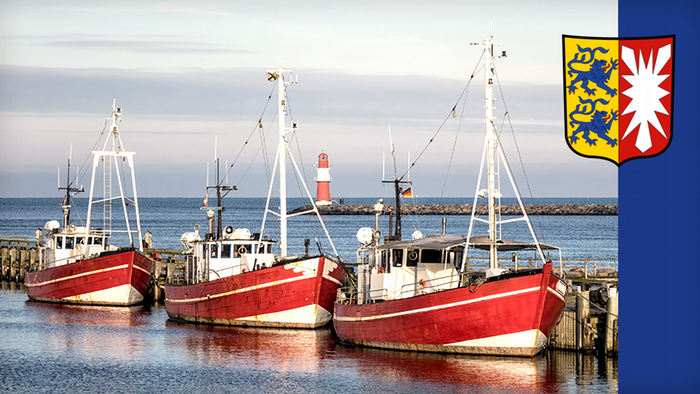 Germany's northernmost state calls itself the land between the seas and has plenty to offer nature lovers. While the North Sea coast is only thinly settled, the state's three biggest cities, Flensburg, Kiel and Lübeck, are located on the Baltic Sea coast. This green state between the North Sea and Baltic Sea is full of protected nature reserves and sandy beaches.

The Wadden Sea, an intertidal zone in the southeastern part of the North Sea, has one of the most diverse ecosystems in Europe. Its landscape is constantly changing due to the tides. In 2009, the Wadden Sea became a UNESCO World Heritage Site. Check-in presenter Nicole Frölich traveled through this fragile habitat, met mudflat dwellers and visited the remote Hallig islands. The filming took place before the coronavirus pandemic.

A trip to the Wadden Sea

The home of Vikings

Haithabu and Danewerk are among the world's best-preserved sites from the Viking Age. While Haithabu was once a thriving trading venue, Danewark consists of a combination of walls, ramparts and marshland. In 2018, UNESCO declared these locations World Heritage Sites. Fly there now with DW!

The Schlei and Flensburg

Great views and an abundance of nature await visitors at the Schlei estuary. Its picturesque villages and great sailing bring thousands of tourists to the region.

Those seeking a maritime atmosphere in a city that has been producing rum for centuries will have plenty to explore in Flensburg. Check-in presenter Nicole Frölich went on a summer excursion to this part of Germany's far North.

The small archipelago of Heligoland lies 50 kilometers (31 miles) off the German North Sea coast. No cars or bicycles are allowed, ensuring that a trip to these far-flung islands will be peaceful. Heligoland offers island bliss between sky and sea.

Something for everyone in Sylt

From luxury accommodations to cozy down-to-earth locales, there's something for every type of traveler in this popular vacation island on the North Sea coast. The first tourists came for a swim here in the middle of the 19th century. Since then, it has become a vacation hotspot: Prior to the COVID-19 pandemic, it hosted nearly one million guests per year.

For those looking for glitz and glamour on the Baltic Sea, the fashionable seaside resort of Timmendorf Beach is the place to be. It has three distinctive piers, including the 150 meter (492 foot) Seeschlösschenbrücke, which even has a Japanese tea house at the end of it.

More than 600 years ago, the city of Lübeck was one of the most important trading centers in northern Europe. Its old town, a UNESCO World Heritage Site, is uniquely located on an island in the middle of the city, while magnificent red-brick houses and churches give it a unique charm. The city is also world-famous for a culinary specialty: marzipan.

Kiel, the state capital by the sea

Cruise ships can dock right in the middle of the city of Kiel, and an increasing numbers of tourists are choosing to travel by boat to visit this venerable seafaring city. Its proximity to the sea makes it especially pleasant to visit.

In the coastal towns of Schleswig-Holstein such as Büsum, Husum or Tönning, visitors must sample a local culinary delicacy: shrimp sandwiches. You can find them in every fish store, snack bar and bakery. We present a popular variation to prepare at home: Bread with shrimp and fried egg, known locally as Halligbrot. Check out this recipe to learn how to make it.

Between the North and the Baltic Sea