If you cannot travel to Germany, Germany will just have to come to you: With compliments from the kitchen! This time we have a specialty from Schleswig-Holstein.

North Sea shrimps are simply THE culinary trademark of the North Sea coast — and our tip for the federal state of Schleswig-Holstein. In Germany, depending on the region, they are known by different names like grey, leek or garnet shrimps.

One of the German North Sea coast's most popular and simplest shrimp dishes is the "Halligbrot" (Hallig bread), named after the small islands in the North Frisian Wadden Sea, the Halligen. This open shrimp sandwich has also been featured in popular literature, like a collection of short stories in the local dialect known as "Der Fischer un sin Fru" (The Fisherman and his wife). This dish involves a mountain of North Sea shrimps being piled on top of a slice of buttered brown bread, topped with a fried egg, or scrambled eggs as a variation. Really tasty! 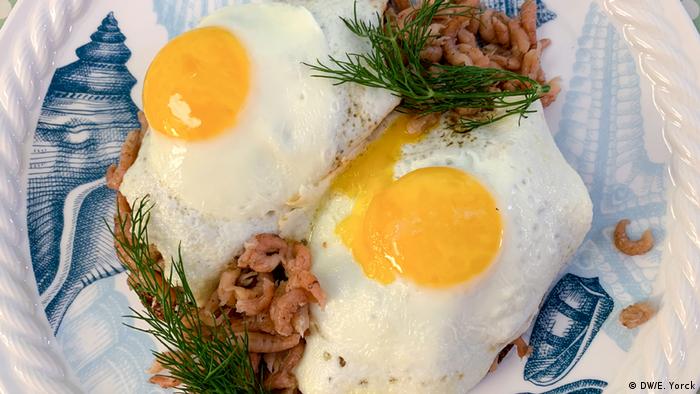 Bread, North Sea shrimps, egg — and the Hallig bread is ready to serve

It's all about the taste

This inconspicuous sea crustacean is featured in many regional specialties throughout Schleswig-Holstein — indeed, throughout northern Germany. Sometimes center stage, sometimes as a discreet extra. North Sea shrimps nestle up against tender filets of plaice, hide in scrambled eggs, pile up on bread, swim in soups and decorate salads. 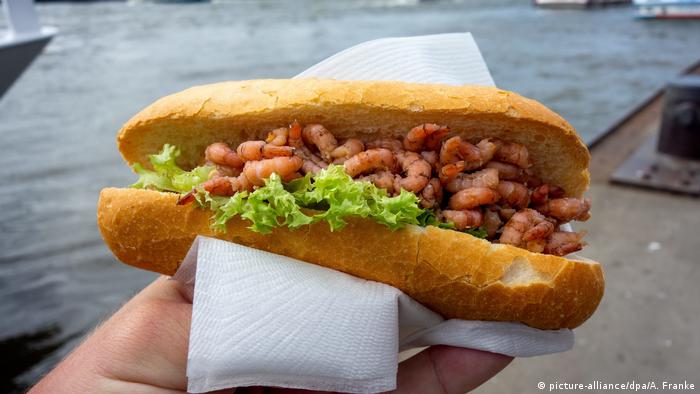 Stuffed generously into a bread roll, North Sea shrimps have become a popular fast food classic — as a shrimp roll. In the coastal towns, whether in Büsum, Husum or Tönning, they are cult. There, the shrimps are sold fresh from the trawler, sometimes ready "to go" into a bread roll. You can find shrimp rolls in every fish shop, snack bar and yes, even at the bakery. A healthy, protein-rich power snack that is not heavy on the stomach and won't land on your hips, it's worth it, even if a shrimp sandwich — depending on the fishing season — can cost as much as 11 euros (12 US $).

From feed to fine food 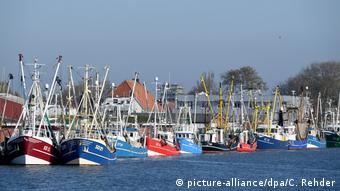 A break in the harbor: shrimp trawler fleet in Büsum

Who would have imagined this 150 years ago? Back then, the slippery crustaceans were still fished by hand from the shallow waters of the Wadden Sea. Back then they were not put to use in the kitchen, but rather in the stable and on the fields, where they served as animal feed and fertilizer. It took a while before the coastal inhabitants came up with the idea of boiling the shrimps in salt water and eating them themselves.

From then on, the shrimp business took off. From the 19th century on, fishermen used special flat boats to catch the shrimps. The so-called shrimp trawlers known locally as "cutters" are easy to maneuver in the coastal waters where the North Sea shrimp lives. The picturesque boats can be seen from far away. On both sides they pull trawl nets attached to booms through the water. 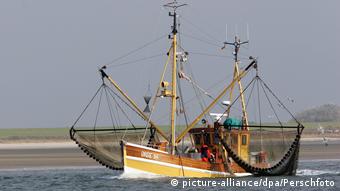 Fishing in the Wadden Sea: A shrimp trawler with its characteristic booms

Shrimping now became a profession that made good money. And Büsum in Schleswig-Holstein developed into the most important harbor for shrimp fishing in Germany. At its peak, in the 1950s, 136 trawlers were registered at the port. Other well-known trawler ports are Husum — also in Schleswig-Holstein — and Greetsiel in Lower Saxony.

First you peel and then you feast

Unfortunately, shrimp fleets are shrinking everywhere, but the history of shrimping has been marketed to the tourists. Büsum celebrates its close relationship with the North Sea shrimp with the annual trawler regatta, a two-day harbor festival. A good opportunity to have a close look at the boats. 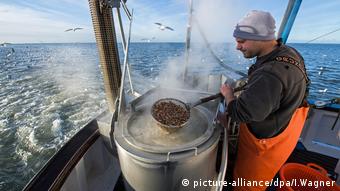 North Sea shrimps are still boiled in seawater on the trawlers

Anyone who wants to can come aboard.  During the holiday season, visitors can hire a shrimp trawler for excursions. At high tide, the boats leave and work the areas near the coast. You can experience the whole process of shrimp fishing. This also includes boiling the quickly perishable shrimp while still onboard the boat. Seawater is used for this. That's why the shrimp taste so intensely of the sea.

Of course, there is also on-board food sampling — but peeling comes before the pleasure. To remove the tender flesh from its shell, twist off the head, and then peel off the shell. Only those who have done this before will know how much work is involved in a mountain of peeled shrimps. It changes the way you regard the simple Hallig bread open shrimp sandwich. 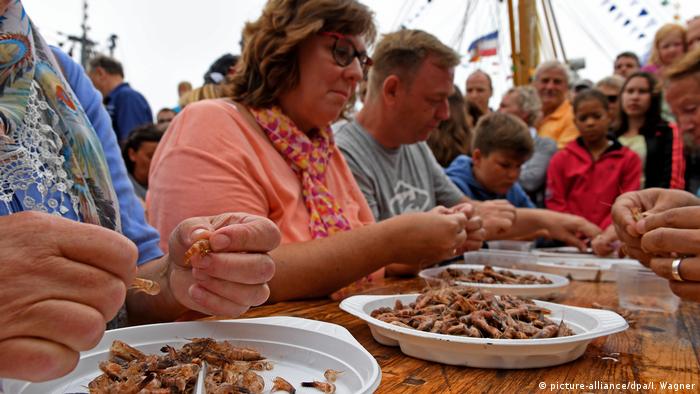 Tourists peeling shrimps at the harbor festival in Neuharlingersiel

Spread the bread with butter, heap the North Sea shrimps on top

Fry the eggs in plenty of butter

Place a fried egg on each bread and garnish with dill