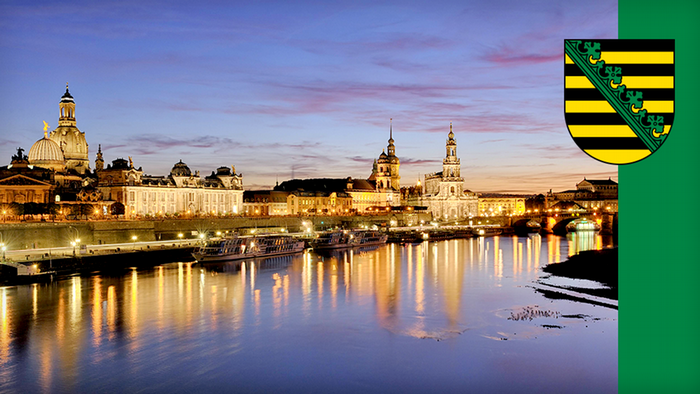 Saxony is steeped in history with a fabulous treasure trove in Dresden, a busy trade fair and trading center in Leipzig, and an insider tip for architecture fans in Löbau. A total of four million people live in this diverse federal state in eastern Germany.

Young, dynamic, creative — Leipzig is Saxony's largest city and an aspiring metropolis. The Peaceful Revolution began here in 1989, which brought down the Berlin Wall and ended East Germany's governing communist regime. Lukas Stege, host of the Travel Magazine Check-in, takes an excursion into the city's past and present. The footage was recorded before the coronavirus pandemic.

The historical and political heart of Saxony beats in the state capital. It owes its nickname, "Florence on the Elbe," to the splendid Baroque buildings in the city center and the vineyards along the River Elbe on its outskirts.

The wine-growing region between Dresden and Meißen is the smallest and easternmost in Germany with around 480 hectares of vineyards. Check-in presenter Lukas Stege visited winegrowers, wineries and castles before the COVID-19 pandemic. On his itinerary: the State Vineyard at Castle Wackerbarth and the organic winery Hoflößnitz. He also climbed the "Goldener Wagen" terraced vineyard.

Climbers will find exactly 1,125 peaks in the Elbe Sandstone Mountains, also known as Saxon Switzerland. This special landscape got its name in the 18th century from Swiss people who felt reminded of their homeland.

A jewel of modern architecture can be found in the small Saxon town of Löbau near Görlitz: Haus Schminke, named after its builder Fritz Schminke. Hans Scharoun designed the family villa in the unusual shape of a ship. Today it is a museum where visitors can even spend the night.

Some 60 kilometers away from Görlitz, Prince Hermann von Pückler-Muskau — a bohemian, travel writer and landscape gardener of great renown — designed Muskauer Park, one of the most beautiful landscaped gardens in the world, in the early 19th century. Covering around 830 hectares, it is made up of a number of smaller parks on either side of the German-Polish border, each with its own character. Muskauer Park is one of the few bi-national UNESCO World Heritage Sites in the world and the largest English-style landscape park in Europe.

The Erzgebirge, or ore mountains as it would be called in English, is a low mountain range in Saxony and Bohemia. It is known the world over for its wood handicrafts, which transform the region into a Christmas wonderland during the Advent season. Originally, the Erzgebirge region was shaped by mining. Silver and tin were already mined here over 800 years ago. Watch as our drone flies into the unique mountainous cultural landscape, which has been a UNESCO World Heritage Site since 2019.

The Erzgebirge with its extensive forests attracts nature lovers in summer and winter. The highest mountain at 1214 meters (3983 ft.) is the Fichtelberg. This is where you will also find the largest ski area in Saxony, a winter paradise. Check-in presenter Nicole Frölich had a look around before the coronavirus pandemic.

The Saxon King Augustus the Strong had his royal capital rebuilt as a Baroque artwork — including the Zwinger palace complex, the Taschenbergpalais, and the Frauenkirche, the Church of Our Lady, Dresden's symbol of tolerance and peace.