Germany's economy minister has told Beijing he wants to see a swift solution to the trade war between China and the US. The long-running spat has harmed the German economy. 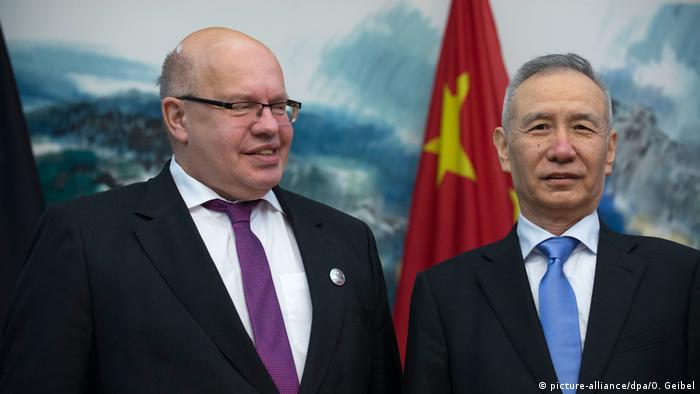 German Economy Minister Peter Altmaier told Chinese Vice Premier Liu He on Saturday that he hoped the US-China trade dispute that has slowed global growth would soon be over.

For months, the world's two largest economies have been locked in a trade war that has cost them billions of dollars and rattled global markets.

The row has also taken its toll on businesses from Germany and other European countries that are operating in China, Altmaier was quoted by state media as saying.

The 9-month trade dispute between Beijing and Washington has disrupted supply chains, upset global markets and involved both sides imposing tit-for-tat tariffs on $360 billion (€322 billion) worth of goods.

Ongoing talks, including a meeting between Chinese and US negotiators in Beijing next week, have fueled optimism the two economies will soon reach a deal to put the conflict to bed.

Altmaier at the summit

The German minister discussed the conflict with Liu on the sidelines of the second Belt and Road forum in the Chinese capital. Representatives from more than 100 countries were attending the event to discuss Beijing's plans to build infrastructure projects connecting China with other parts of Asia, Africa and parts of Europe.

In separate comments to reporters on Friday, Altmaier said major European Union countries were keen to sign a deal with China, but as a group rather than individual states.

"In the big EU states we have agreed that we don't want to sign any bilateral memorandums but together make necessary arrangements between the greater European Economic Area and the economic area of Greater China," he said.

In March, Italy became the first G7 country to sign up to the Belt and Road project. And while other European countries have expressed an interest in participating as well, France and Germany insist China must improve access and fair competition for foreign firms.

Altmaier said he was heartened by Chinese President Xi Jinping's pledge to make China's economy more accessible to foreign business, and to ensure Belt and Road was transparent and sustainable.

"We will take this promise seriously" and make suggestions on how to achieve these goals in both Asia and Europe, Altmaier said, adding that the EU had to make its own interests clear.

What is Belt and Road?

The Belt and Road Initiative is the signature foreign policy project of President Xi, with infrastructure development and investment in 152 countries globally. The aim is to reestablish traditional land-based connections (the "belt" part of the strategy) from China to other parts of Asia, Europe and beyond.

Since the initiative was launched in 2013, China has invested some $90 billion (€81 billion) in projects, with banks supplying some $200 billion to $300 billion. But the massive project has proven controversial, with some voicing concerns that it is fueling local corruption and leaving behind debt and environmental damage.