Sieren′s China: Little good will at the EU-China summit | World | Breaking news and perspectives from around the globe | DW | 11.04.2019

Sieren's China: Little good will at the EU-China summit

China and the European Union were at least able to issue a joint statement during their summit, but it doesn't contain much more than good intentions. DW's Frank Sieren says the really important topics are missing. 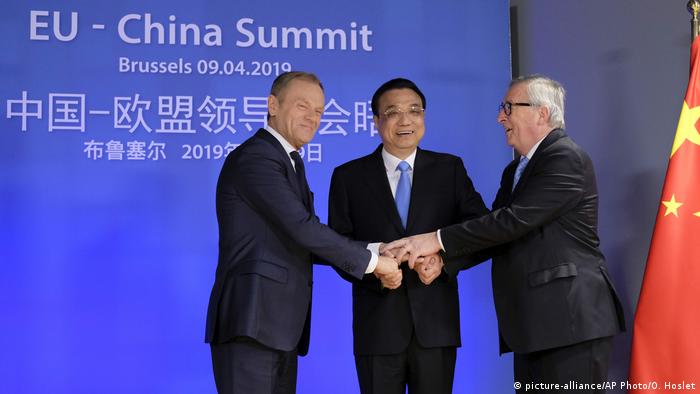 European Council President Donald Tusk may have said there was a "breakthrough," but this is a willful interpretation of this week's EU-China summit. At least there was a joint statement, which was not the case last year. On the other hand, there is very little in it that is binding. Next year, there should finally be the investment agreement Brussels and Beijing have been working on since 2013. There will also be an annual report to see whether the steps are actually implemented.

Read more: China could be big winner in no-deal Brexit

Generally, however, the document is full of statements about having intentions that need to be implemented, of wanting to find solutions and of recognizing progress, but there is little mention of contentious issues. For example, one passage reads: "The EU and China look forward to the early launch of the joint feasibility study on deepening cooperation in the wines and spirits sector." Cheers!

Otherwise, there are constant glimpses of the Chinese viewpoint. Beijing does not recognize the Western perspective on human rights, but rather all "human rights," which of course includes the Chinese perspective. There is to be no negotiation on this subject and further "exchanges" will be conducted only "on the basis of equality and mutual respect." The West no longer decides what is universal when it comes to human rights.

There was also no progress in cooperation on the One Belt One Road initiative, often referred to as China's New Silk Road, or, as the EU puts it, the EU-China "Connectivity Platform." The EU is insisting China be transparent and follow "international norms and standards," whatever that may mean. Meanwhile, China is insisting "the law of the countries benefitting from the projects" being followed. Both perspectives stand side by side in the statement.

In addition, China and the EU said they wanted to continue their work on a "Joint Study on sustainable Railway-based Corridors between Europe and China." However, the EU can't do anything to stop China from massively expanding One Belt One Road on its own. It also can't stop China from making bilateral investment deals with EU member states. Indeed, there is nothing in the statement to indicate that the EU is very critical of this strategy. China is already so powerful that it can prevent these viewpoints from being put down on paper.