Iran's Revolutionary Guards have warned of "decisive" action if unrest over a 50% fuel hike continues. At least two people have died in violent riots so far. 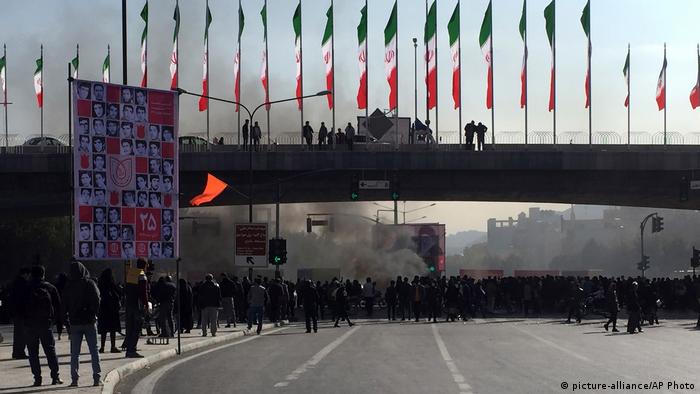 Germany on Monday called on Iran to respect legitimate protests which started soon after the government announced it was raising fuel prices by over 50%.

"It is legitimate and deserving of our respect when people courageously air their economic and political grievances, as is currently happening in Iran," Chancellor Angela Merkel's spokeswoman Ulrike Demmer told reporters.

"The Iranian government should respond to the current protests with a willingness to engage in dialogue," she told a regular press conference, adding that Germany was following the events "with concern."

"We urge the government in Tehran to respect freedom of assembly and expression."

Iran's Revolutionary Guards warned the protesters of "decisive" action if unrest over the fuel price hike did not cease, state television reported.

"If necessary we will take decisive and revolutionary action against any continued moves to disturb the people's peace and security," the Guards said.

While Iran's fuel prices are still among the lowest in the world, the hike comes on top of inflation, recession, and US sanctions, dealing a heavy blow to many people in the country.

Fuel in Iran is heavily subsidized, costing 10,000 rials (€0.08, $0.09, approximately) per liter prior to the price hike. Iranian President Hassan Rouhani argues that raising prices is a natural move considering the current conditions. The country's 80 million citizens currently consume about 90 million liters of cheap oil a day.

Additional measures to ration fuel should bring in 300 trillion rials ($2.55 billion) annually, head of the country's Planning and Budget Organisation Mohammad Bagher Nobakht said on state television, adding that payments will start within the next 10 days.

Germany on Sunday tightened its travel advice for Iran, warning citizens to avoid demonstrations and large gatherings and refrain from expressing political opinions to strangers.