Iranian authorities imposed a nationwide internet blockade after a hike in fuel prices prompted deadly riots throughout the country. Ayatollah Ali Khamenei defended the move and blamed Iran's "enemies" for the violence. 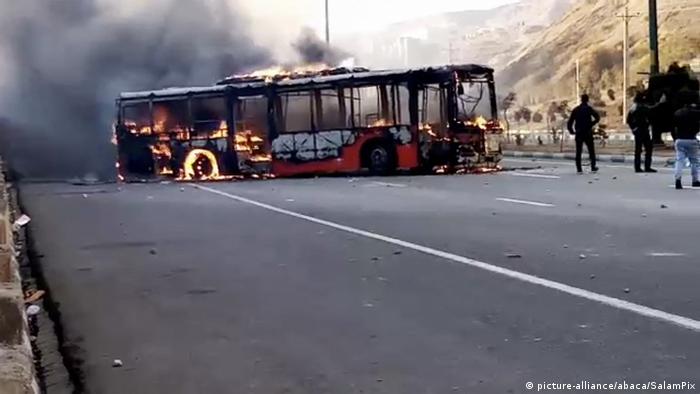 Over 1,000 people were arrested after protests in Iran that saw around 100 banks torched, Iran's Fars news agency said. At least two people were killed in the unrest by Sunday, although the exact death toll was not immediately clear. Meanwhile, US officials have condemned Iran's internet blockade.

Fars, which is close to Iran's Revolutionary Guard, said that around 87,000 people protested in Tehran and many other Iranian cities.

The unrest started soon after the government announced it was raising fuel prices by over 50% on Friday. While Iran's fuel prices are still among the lowest in the world, the hike comes atop of inflation, recession, and US sanctions, dealing a heavy blow to many people in the country.

Ayatollah 'not an expert'

Iran's Supreme Leader Ali Khamenei endorsed the government's move in a televised speech on Sunday. At the same time, the ayatollah said that he was "not an expert and there are different opinions" on the fuel hike.

He also blamed the violence on Iran's enemies and supporters of the late shah Mohammad Reza Pahlavi, who was ousted out of the country 40 years ago.

"The counter-revolution and Iran's enemies have always supported sabotage and breaches of security and continue to do so," Khamenei said.

"Some people would definitely get upset over this decision ... but damaging and burning is not something (normal) people would do," the ayatollah said. "It is hooligans."

The country's intelligence ministry said those behind the unrest have been identified and that "appropriate action" was being taken against them. The government also imposed a 24-hour internet blackout, with connectivity dropped to 7% of its usual levels on Saturday night, according to the monitoring group NetBlocks.

"The ongoing disruption is the most severe recorded in Iran since President Rouhani came to power, and the most severe disconnection tracked by NetBlocks in any country in terms of its technical complexity and breadth," the group said.

"We condemn the attempted shutdown of the internet. Let them speak!" US State Department spokeswoman Morgan Ortagus posted on Twitter.

US ambassador to the United Arab Emirates, John Rakolta, said the Iranian people "want freedom," but stressed that Washington was not advocating regime change."

"These developments that you see right now are their own people telling them: 'We need change and to sit down with the American government'," he told reporters.

Tehran has said it took the fuel in retaliation to the earlier seizure of an Iranian vessel. "You stole our oil, we took it back from you," said Ayatollah Ali Khamenei.