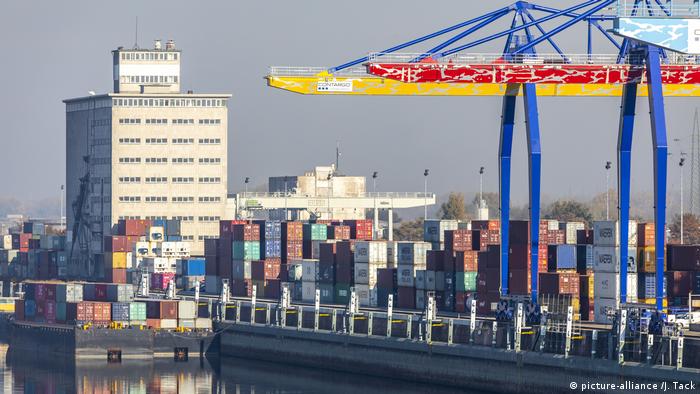 Germany's output and exports jumped in June, amid signs that Europe's economy is rebounding from the historic downturn caused by the coronavirus crisis.

Monthly output in Germany increased by 8.9% in June, the Federal Statistical Office (Destatis) reported on Friday, while exports grew at 14.9%.

Both figures beat market forecasts and built on solid gains made in May.

Germany's economy is getting back to normal, following months of coronavirus lockdown. It was dealt an unprecedented blow in the first half of the year, reporting a Gross Domestic Product (GDP) contraction of 10.1% in the April to June period — its fastest contraction in 50 years.

The contraction was repeated across the Eurozone, with the bloc's GDP shrinking by 12.1% in the second quarter of 2020.

June imports in Germany also grew by 7% from a 3.6% rise in May, Destatis said. The figure did not quite reach the 10.6% increase, expected by analysts.

Germany's foreign-trade surplus rose to €15.6 billion ($18.4 billion) — around the same level as a year ago, when it was €16.5 billion, according to Friday's statistics.

What is driving Germany's gains?

Production in Germany's key automotive industry was up 54.7% in June, driving output, but this still remains about 20% below production levels in February – before the virus struck.

Consumer-goods production rose 7.3%, while construction output was up 1.4%.

"The recovery from here will be slow and uneven," said Claus Vistesen, chief eurozone economist with the Pantheon Macroeconomics research group, commenting on the figures.

Carsten Brzeski, economist at ING said: "With these strong numbers, some upward revision of the second quarter GDP data should not be excluded."

"All in all, today's data confirm that at least the rebound after the lifting of the lockdown measures is V-shaped," he said, adding that the recovery might not last long with the risk of increasing infections and subsequent lockdowns a possibility.

How a mid-sized German firm finds fortune in crisis