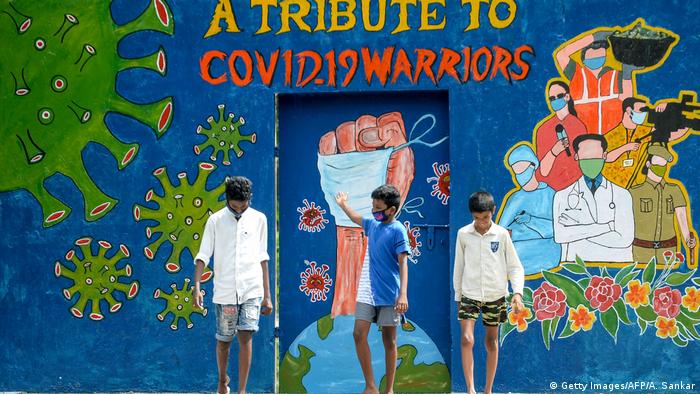 India has recorded its highest daily jump in coronavirus cases while Australia's borders could remain closed until the end of the year.

Germany has, for the second day in a row, reported more than 1,000 infections and Hungarian Prime Minister Viktor Orban has ordered almost five million vaccines as part of an EU scheme.

The total number of globally registered infections has exceeded 19 million, according to the latest data from Johns Hopkins University, while more than 714,000 people have died from COVID-19.

Here are Friday's latest developments regarding the novel coronavirus around the world:

Germany reported its highest number of infections for three months as the country's second wave showed no signs of easing up.

Germany's public health authority, the Robert Koch Institute (RKI), announced that 1,147 infections had been registered over a 24-hour period, while the death toll increased by eight.

The UK will not hesitate to add more countries to its quarantine list, finance minister Rishi Sunak said when asked whether France could be added. Spain is already on the list while it was announced on Thursday night that travelers returning to the UK from Belgium, Andorra and the Bahamas would also need to isolate for 14 days.

Hungarian prime minister, Viktor Orban, said his country has ordered almost five million vaccine doses for the coronavirus as part of an EU scheme. The bloc's executive branch, the European Commission, wants to strike deals with up to six pharmaceutical firms to buy potential vaccines in advance.

Wearing face masks will be compulsory in outdoor situations from August 8 to August 30 in parts of Marseille, France's second-largest city, with Paris expected to follow suit in the coming days.

Spanish authorities have placed some 32,000 people into lockdown in the central riverside town of Aranda del Duero. Residents movements will be kept to a bare minimum and they will not be allowed to leave the town which is situated 150 kilometers (90 miles) north of Madrid.

India, the hardest hit country in Asia, has reported a record daily hike in infections, taking its total number of cases to over two million. It is the third nation to pass that unwanted milestone with the virus spreading to smaller towns and rural areas. Experts have warned that the country of some 1.3 billion people is still months away from hitting its peak.

Professor Shamika Ravi from the Brookings Institution India Center has been crunching the country's coronavirus numbers on almost daily basis. She told DW that India's main issue is its "relatively weak health infrastructure in a lot of the states where the infection is spreading now." She also said the country of some 1.3 billion people should focus on minimizing deaths, rather than cases.

China's economy appears to be recovering from the pandemic-induced slowdown, reporting an on-year rise in exports of 7.2% in July. The increase confounded market analysts' expectations.

Australian Prime Minister, Scott Morrison, has said its borders will remain closed to international visitors for "some months" due to a spike in cases.

Read more: A great getaway or a coronavirus cage? The difficult restart for sea cruises

The announcement came as the state of Victoria said its infection rate has been "relatively flat" in the past week, a state health official said.

The number of cases in Africa has passed the 1 million mark, but health experts say the true figure is probably several times higher, due to a lack of testing among the continent's 1.3 billion people. Just five countries account for 75% of the registered infections —  South Africa, Egypt, Nigeria, Ghana and Algeria.