Are Berlin residents packing up and leaving the city to flee the coronavirus? | Germany | News and in-depth reporting from Berlin and beyond | DW | 06.08.2020

Are Berlin residents packing up and leaving the city to flee the coronavirus? 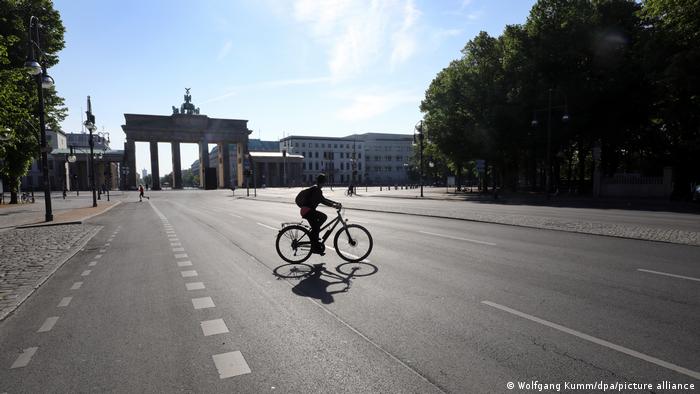 The coronavirus pandemic has had a major impact on big city life across the world. Media reports show that some 400,000 New Yorkers left the US metropolis in recent weeks to reduce their risk of catching the virus. People in London and Paris have similarly been moving to the countryside to get away from it all.

But Berlin, a city of just 3.8 million, has not witnessed such an exodus, despite seeing a significant number of coronavirus case. That is because few Berliners own a country house, explains Ariane Sept of the Leibniz Institute for Research on Society and Space (IRS).

Instead, she says, many Berliners own or rent small allotments outside the city which are not officially designed for long-term residency. Among other things, her institute examines the interrelation between cities and their rural surroundings, such as between Berlin and the state of Brandenburg. The researchers are especially interested in studying whether such relationships cause large-scale transformations in either realm.

Berliners moving to the suburbs

Ariane Sept predicts that the pandemic will not precipitate any major changes in Berlin but instead accelerate the ongoing trend of city dwellers moving to the suburbs. This city flight has been ongoing for 10 years already. She says since 2014, young families from the capital have also been moving even further out into small Brandenburg towns and cities. A report published by the Brandenburg government on the state's housing market unscores this. It finds that people are moving to "second-tier cities and villages due to low costs." This could, the report concludes, make up for the population decline that is has been besetting Brandenburg for years.

The pandemic might be encouraging Berliners who toyed with idea of moving to the countryside to go ahead with their dream, says Sept. "Some are already giving country life a go by temporarily renting a house or flat that gives them more space and quiet — and reduces their infection risk," the researcher says. As many jobs can be done remotely, many are finding this lifestyle works well for them.

Not everyone is cut out for it, though, says Sept. Country life is not necessarily what some romanticize it to be. "Everyday life can be nice, but also exhausting — you will have to get in your car to go grocery shopping or get to the office," she says. Unlike in cities, where often a 5-minute cycle ride is all it takes to run some errands, village life requires much more planning.

So far, Berlin authorities have not recorded a population decline from city dwellers moving to rural Brandenburg. In fact, fewer people left the city between March and July 2020 than during the same period last year. Yet the influx of people into the city has slowed down as well, presumably due to the pandemic and related travel restrictions. In any case, Berlin has not experienced the kind of mass exodus that New York is witnessing. Though this could still happen, as the Brandenburg housing report states. It argues that a move towards working remotely could increase demand for rural housing.

"The question is not who will choose to leave Berlin, but who will not move here in the first place because the pandemic has made the city suddenly far less attractive," says Sept. International students, for instance, tended to move to the German capital not only for its universities but also for its nightlife. But now that clubs are forced to remain shut, and some are facing bankruptcy, prospective students may pick other, smaller cities instead. "Smaller cities may have lower rents and better universities," Sept says.

Berlin's population has been growing in recent years. This is particularly the result of foreigners, like students and creative types, who have made the city their new home. Without them, Berlin would be shrinking.

Blane Bachelor had just moved to Berlin when COVID-19 spread to Europe and the lockdown began. She and her family were stuck in their new home without a network of friends or knowledge of German. But they could clap.

Amid coronavirus, Berlin's tango scene struggles to stay on its feet

The Argentine dance known for sultry intimacy is now seen by some as something quite different: a high-risk activity. In Berlin, a global tango hotspot, dancers are trying to keep their passion alive during the pandemic.