Germany is set to equip its air force with US-built F-35 stealth military jets. Berlin had previously announced that it would invest more in defense in light of Russia's invasion of Ukraine. 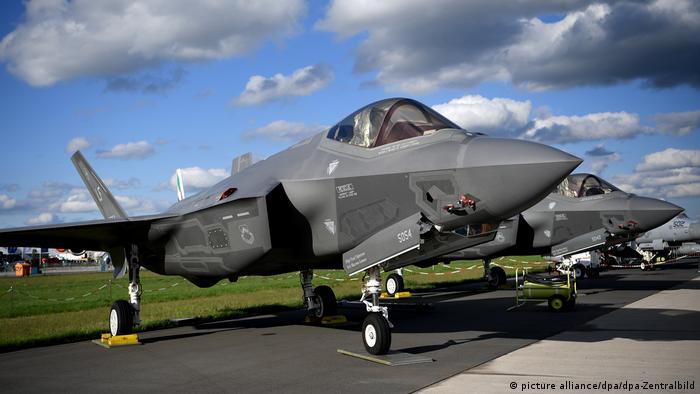 The unique shape of the plane, as well as a special coating, make it hard for radar to detect

Germany is seeking to buy a consignment of US F-35 fighter jets to replace its aging Tornado fleet, the German Defense Ministry has told parliament.

The decision comes after German Chancellor Olaf Scholz last month announced a massive boost in defense spending as the Ukraine conflict forces Berlin to reassess its foreign and defense policies.

Why does Germany need the planes?

Berlin is seeking to use the Lockheed Martin planes to replace the Tornados, which were introduced more than 40 years ago.

In light of Russia's invasion of Ukraine, Scholz said he would bring the nation's investments above a key NATO commitment of 2% of GDP.

The F-35 is considered the world's most modern combat aircraft. Its unique shape and outer coating make the jet difficult for enemy radar to detect.

At present, the Tornado is the only German jet capable of carrying US nuclear bombs, stored in Germany, in case of a conflict. However, the German air force has been flying those planes since the 1980s, and they are due to be phased out between 2025 and 2030.

Russia-Ukraine crisis: Is Germany letting its allies down?

First steps yet to be taken

The government was seeking more information on when the planes could be delivered, according to a document circulated to lawmakers.

"In a first step, we will put in a formal request with the US government for the purchase of the F-35A in order to get clarity regarding delivery timelines and options for cooperation in training and maintenance," the document said.

Germany plans to buy up to 35 of the planes, sources said.

German Defense Minister Christine Lambrecht has said there will be no "shopping spree" after being promised the sum.

Concerns had previously arisen that buying the F-35 aircraft could scupper joint plans with France to build a joint European combat aircraft.

The procurement of F-35s would also prove a blow for Boeing, whose F-18 was the preferred option of former German defense minister Annegret Kramp-Karrenbauer to replace the Tornado.

Berlin takes to the streets in support of Ukraine