Germany to boost green energy in Africa - but will it work? | Environment | All topics from climate change to conservation | DW | 30.06.2017

Germany to boost green energy in Africa - but will it work?

With Africa’s energy demand on the rise, the German government is launching a new initiative aimed at helping citizens in African countries produce their own - by forming German-style energy cooperatives. 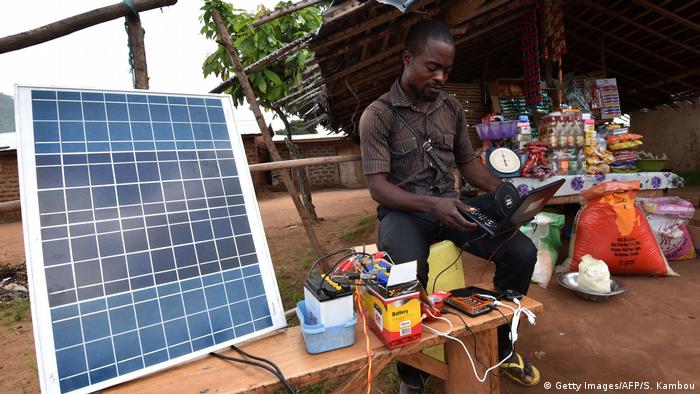 But in sub-Saharan Africa, more than two-thirds of the population has no access to electricity, according to data from the World Bank. Now, Germany is aiming to change that with an initiative set to boost citizen-led renewable energy projects across the continent.

The initiative is part of the German government's "Marshall Plan" for Africa - a new cooperation and development strategy unveiled earlier this year.

As Africa's population grows, and infrastructure and technology develop, the continent's demand for energy is rapidly increasing. By 2040, Africa is set to need 80 percent more energy than the current demand, according to German government data.

But Minister Müller expressed confidence for the future. "Africa can be the first continent to supply itself fully with renewable energy," he said.

The aim is to boost development by increasing access to energy. If people in remote villages could produce their own electricity, they would be able to, for example, keep their food cool. Farmers could use solar-powered pumps to bring water to their fields, and handicraft businesses would boost their production.

Communities are key to implementing the project - and Germany's numerous energy cooperatives are set to serve as a model. Germany is home to more than 850 energy cooperatives, with more than 180,000 members. Community energy projects have a right to sell their electricity directly to third parties.

The German Development Ministry is keen to use this expertise to help create similar groups in Africa. Over the next five years, the plan is to set up 100 partnerships in which German cooperatives can share their knowledge and experience with African community groups – in eight countries across the continent.

Eckhard Ott, CEO of the DGRV, welcomed the concept. "Energy cooperatives support local economies and boost acceptance for renewable energies," he said. "Africa should also take advantage of this."

However, he pointed out that although German energy cooperatives could help provide African partners with essential know-how, a good legal framework and affordable technology are also key to the success of such projects.

Jesse Pielke, head of operations at German energy startup Africa GreenTec, agreed that the partnerships are a "great idea."

But Pielke also emphasized the importance of understanding the differences between working in Germany and African countries.

"We believe that the large-scale approach of just implementing a German solution into the African continent is not going to work - simply because you don't have the same basic conditions," he told DW.

Germany has a functioning energy market, people with relatively high income, people with the know-how to implement solar energy and other renewable energy sources into their every day lives. "In many cases, you will have a hard time finding that in Africa," he pointed out.

The German government has pledged to improve training opportunities for young people to learn the skills needed to work on renewable energy projects. It has also promised to support partner countries and groups in meeting the political and legal conditions needed to develop a decentralized energy supply.

As well as being able to attract investment, working in the renewable energy sector in Africa demands intimate knowledge of local cultures, said Pielke. "Communication is very important," he told DW. "You need to learn about the local way to do business and how to reach people."

But he doesn't think the German government's plan to set up cooperatives will create competition for energy startups like Africa GreenTec.

"It's a different approach," he told DW. "As a social business, we don't see other people or institutions as competitors, but more as partners with the same idea and the same goal - electrifying people in Africa."

Our young eco bloggers in Africa and Germany are confronting new languages, solar energy, organic farming and African wildlife. They are volunteering far from home to help the environment. (08.06.2017)

The Development Ministry's position paper on the initiative (in German)